Quotes by and about Calvin Coolidge

Coolidge: "What I have ever been able to do has been the result of first learning how to do it. ... I need not only hard work but experience to be ready to solve problems."

Coolidge: "My progress had been so slow and toilsome, with little about it that was brilliant, or spectacular, the result of persistent and painstaking work, which gave it a foundation that was solid."

Coolidge: "It has been my observation in life that, if one will only exercise the patience to wait, his wants are likely to be filled."

Coolidge: "[I hold the] belief that, when a duty comes to us, with it a power comes to enable us to perform it."

Coolidge: "There is no dignity quite so impressive, and no independence quite so important, as living within your means."

Coolidge: "What we need in appointive positions is men of knowledge and experience who have sufficient character to resist temptations."

Coolidge: "Any reward that is worth having only comes to the industrious. The success which is made in any walk of life is measured almost exactly by the amount of hard work that is put into it."

Coolidge: "Wealth comes from industry and from the hard experience of human toil. To dissipate it in waste and extravagance is disloyalty to humanity."

Coolidge: "In spite of all his greatness, any one who had as many ideas as Jefferson was bound to find that some of them would not work."

Coolidge: "My father was painstaking, precise and very accurate, and had such wide experience that the lawyers of the region knew they could rely on him to serve papers in difficult cases and make returns that would be upheld by the courts. This work have him such a broad knowledge of the practical side of the law that people of the neighborhood were constantly seeking his advice, to which I always listened with great interest. He always counseled them to resist injustice and avoid unfair dealing, but to keep their agreements, meet their obligations and observe strict obedience to the law."

Coolidge: "By reason of what I saw and heard in my early life, I came to have a good working knowledge of the practical side of government. I understood that it consisted of restraints which the people had imposed upon themselves in order to promote the common welfare."

Coolidge: "As I look back on [where I grew up] I constantly think how clean it was. There was little about it that was artificial. It was all close to nature and in accordance with the ways of nature. The streams ran clear. The roads, the woods, the fields, the people - all were clean. Even when I try to divest it of the halo which I know always surrounds the past, I am unable to create any other impression than that it was fresh and clean."

Coolidge: "If I had permitted my failures, or what seemed to me at the time a lack of success, to discourage me I cannot see a way in which I would ever have made progress. If we keep our faith in ourselves, and what is even more important, keep our faith in regular and persistent application to hard work, we need not worry about the outcome." 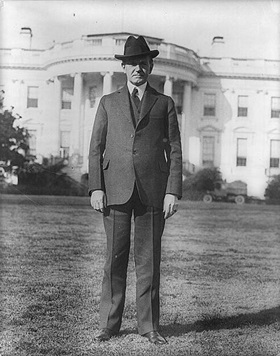 Coolidge: "Our talents are given us in order that we may serve ourselves and our fellow men. Work is the expression of intelligent action for a specified end. It is not industry, but idleness, that is degrading. All kinds of work from the most menial service to the most exalted station are alike honorable."

Coolidge: "I am prejudiced in behalf of the country. ... Country life does not always have breadth, but it has depth. It is neither artificial nor superficial, but is kept close to the realities."

Coolidge: "Those who attend a ... school know how to pass the examinations, while those who study in an office know how to apply their knowledge to actual practice. It seems to me that the best course is to go to a school and then go into an office where the practice is general. In that way the best preparation is secured for a thorough comprehension of the great basic principles of the profession and for their application to existing facts."

Coolidge: "Tradition and custom, it will be seen, are oftentimes determining factors in the Presidential office, as they are in all other walks of life. This is not because they are arbitrary or artificial, but because long experience has demonstrated that they are the best methods of dealing with human affairs."

Coolidge: "Things are done in a certain way after many repetitions show that way causes the least friction and is most likely to bring the desired result. While there are times when the people might enjoy the spectacular, in the end they will only be satisfied with accomplishments."

Amity Shlaes: "Like George H.W. Bush, Coolidge understood ... that a man [lives] not for himself but for service."

Amity Shlaes: "Always, a philosophy of service inspired Coolidge. He served his family, to whom he was intensely loyal; he served the law and the people."

David Greenberg: "His blend of caution and unobtrusive ambition ... served him well."