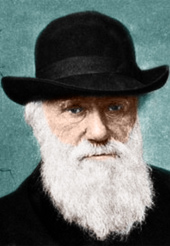 Quotes by and about Charles Darwin

Darwin: "[In my life] I ... followed a golden rule, namely, that whenever a published fact, a new observation or thought came across me, which was opposed to my general results, to make a memorandum of it without fail and at once; for I had found by experience that such facts and thoughts were far more apt to escape from the memory than favorable ones."

Darwin: "A republic cannot succeed till it contains a certain body of men imbued with ... principles."

Darwin: "I had a high notion of Aristotle's merits, but [until I read him] I had not the most remote notion what a wonderful man he was."

Darwin: "Ignorance more frequently begets confidence than does knowledge: It is those who know little ... who so positively assert that this or that problem will never be solved by science."

Darwin: "False views [even] if supported by some evidence, do little harm, as every [scientist] takes a salutary pleasure in proving their falseness; and when this is done, one path towards error is closed and the road to truth is often at the same time opened."

Darwin: "I have attempted to write the following account of myself, as if I were a dead man in another world looking back at my own life. [I have not] found this difficult [and] I have taken no pains about my style of writing."

Darwin: "We can allow satellites, planets, suns, universe, nay whole systems of universe to be governed by laws, but the smallest insect, we [erroneously] wish to be created at once by special act."

Darwin: "Every man must judge for himself between conflicting vague probabilities."

Darwin: "[We should strive for] educating and stimulating in all possible ways the intellectual faculties of every human being."

Darwin: "With me, the horrid doubt always arises."

Darwin: "In order [to reach the highest standard one] ought [to] have reason and imagination exercised to the highest point."

[His son:] "No fact, however small, could avoid releasing a stream of theory [into his mind.]"