Quotes by and about Hermann Goering

Goering: "We will go down in history either as the world's greatest statesmen or its worst villains."

Goering: "It is silly to appeal to people's moral sense."

Goering: "I remember a meeting of officers. ... [They were] discussing [how to provide] meals and beds for veteran officers. 'You damn fools!' I told them, 'Don't you think an officer who is worth his salt can find a bed [on his own] ... the bed of a pretty blonde?'" 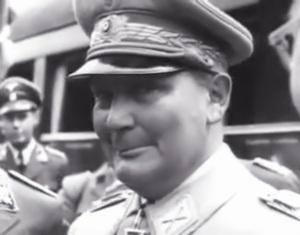 [Explaining why he was not a Freemason:]
Goering: "I had a date to meet some friends to join the Freemasons in 1919. While waiting for them, I saw a pretty blonde pass by, and I picked her up. Well, I just never did get around to joining the Freemasons."

Goering: "I think that women are wonderful but I've never met one yet who didn't show more feeling than logic."

[Reprimanding the other Nazi captives for cooperating with the Allies during the Nuremberg Trials:]
Goering: "I just wish we could all have the courage to confine our [legal] defense to three simple words: 'Lick my ass!'"

Gustave Gilbert [Goering's prison psychologist:]: "He cared little for learning, although he was of superior intelligence."

Gustave Gilbert "[Goering was] a ruthless adventurer and cynical realist."

Gustave Gilbert: "[He was a] problem child and gang-leader-turned-statesman."

Gustave Gilbert: "[In his childhood] if there was any question about his leadership ... he would bash [the other children's] heads together and let them know ... who was boss." 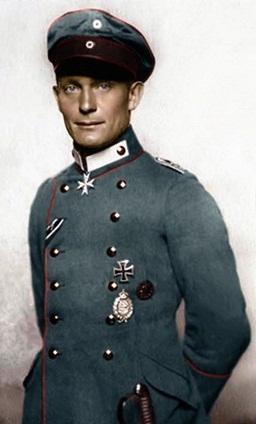 Gustave Gilbert: "The poor civilians [who taught him at the officer's academy] were the constant butt of practical jokes and outlets for rowdiness in the classroom."

Gustave Gilbert: "[He is a] self-styled Achilles."

Gustave Gilbert: "He really had no interest in Nazi ideology."

Gustave Gilbert: "[He had a] drive for physical stimulation and excitement."

Gustave Gilbert: "[His drug use was in part] because of his need for physical stimulation."

Gustave Gilbert: "There was probably another reason for Goering's [drug abuse during the 1940s]: Mass extermination! Not that Goering was one to suffer acute anxiety reactions to the murder of political rivals, the shooting of hostages, the bombing of open cities, or the starvation of conquered populations. But his perverted sense of values had set certain limits to the acting-out."

[Foreign minister of Italy, on Goering's visit to fascist Italy in 1942:]
Count Ciano: "At the station [where I received him] he wore a great sable coat, something between what motorists wore in 1906 and what a high grade prostitute wears to the opera." 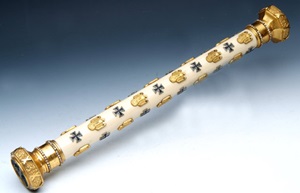 William Potts: "Herman Goering surrendered his [self-designed] Generalfeldmarschall baton to the 7th Army on May 9, 1945. The shaft is made of ivory and is embossed with 20 gold eagles and 20 platinum crosses. The ends are gold and encrusted with 640 diamonds."

Adolf Hitler: "When I talk with Goering, it's like a bath in steel for me; I feel fresh afterward. He has a stimulating way of presenting things."

Joseph Goebbels: "[Goering] has the heart of a child."