Quotes by and about John Mackey

Mackey: "Particularly when I was younger I was more introverted. ... I recharge in privacy and I need time to myself. [But] I'm much more extroverted than I used to be, and I think that's partly because that's what Whole Foods needed me to become."

Mackey: "I used to think that if I could just be creative and make good decisions, then that would be enough. But the company needed me to get out into the stores and interact with these thousands of [employees] because I'm a figurehead. I'm the symbol and the founder of the company. ... That was very difficult for me to do." 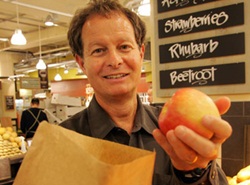 Mackey: "I've never been that good at small talk. I found it very difficult to interact with all these different [employees]. I didn't enjoy it and I was kind of scared to do it. ... But once I began to do it, I got better at it ... and I became more relaxed."

Mackey: "Human beings are very diverse in their wants and desires. Capitalism, cooperating through the market, aims to satisfy those wants and desires. So that creates tremendous space for individuality. If you live in an authoritarian society, some special interest group, whether a religious hierarchy or university intellectuals or some group of fanatics who think that they know what's best for everyone, can force their values on everyone else. They get to dictate to others. In a capitalistic society you have far more space for individuality."

' and 'The Theory of Moral Sentiments

.' Synthesize those together, and you have self-interest and you have empathy, care and sympathy for others [which together make up] the foundation of a great economic system. But intellectuals and economists ignored that ethical foundation of capitalism and they tried to ground it on strict self-interest. ... [Capitalism] has to be defended on an ethical basis, not just the fact that it creates wealth."

Mackey: "It is essential that we read books that disagree with our own personal viewpoints - that challenge us, stretch us, upset us, and break us out of our comfortable world views, whatever they may be. I'm far less interested in being right or belonging to some school of thought than I am in personally learning and growing."

[Interviewer: "You have a reputation for liking to argue."]
Mackey: "But I don't like to argue to be right. I like to argue because that's how I get to the truth. I think dialectically."