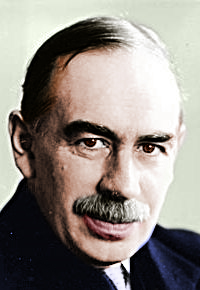 Quotes by and about John Maynard Keynes

Keynes: "The ideas of economists and political philosophers, both when they are right and when they are wrong, are more powerful than is commonly understood. Indeed the world is ruled by little else. Practical men, who believe themselves to be quite exempt from any intellectual influence, are usually the slaves of some defunct economist."

Keynes: "Madmen in authority, who hear voices in the air, are distilling their frenzy from some academic scribbler of a few years back. I am sure that the power of vested interests is vastly exaggerated compared with the gradual encroachment of ideas."

Keynes: "Education is the inculcation of the incomprehensible into the ignorant by the incompetent."

[Interviewer: "How do you think John Maynard Keynes will be remembered?"]
Friedrich Hayek: "As a man with a great many ideas who knew very little economics. ... His interests were very largely guided by aesthetic appeal."

Friedrich Hayek: "[Keynes] was convinced that what other people could have said about [a] subject was not frightfully important."

Friedrich Hayek: "After [Keynes] had written his theory, he was so convinced that he had re-done the whole science [of economics] that he was rather contemptful of anything that had done before."