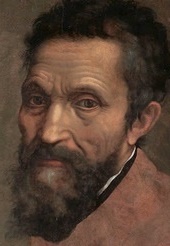 Quotes by and about Michelangelo

Tamara Smithers: "There was no clear-cut design when Michelangelo started to carve. Form emerged out of stone in the act of carving, when the artist immersed himself in his art. One of the reasons why Michelangelo left so much work unfinished was that he kept changing his mind when he worked. His hand obeyed a [mind] that was volatile."

William E. Wallace: "Michelangelo ... was not a theorist. ... Rather, the evidence is in his accomplishments."

William E. Wallace: "Michelangelo did not lack for ambition. He became an engineer by necessity, and he learned on the job. For San Lorenzo, he quarried a mountain of marble [by himself] including blocks of a size and quantity unequaled since Roman times."

William E. Wallace: "[He was] a person who shuttled constantly between the sublime and the mundane."

Carl Jung: "Up to [his] time, stone [art] had been practically immovable, even Greek sculpture. But with Michelangelo, the stone began to move with a surplus of life which is hardly believable. It seems as if ... there is too much life, the stone seems to walk away."

Mark Twain: "The Creator made Italy from designs by Michelangelo!"