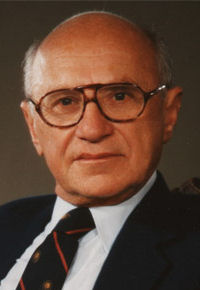 Quotes by and about Milton Friedman

Friedman: "Hell hath no fury like a bureaucrat scorned."

Friedman: "Keynes ... set forth a hypothesis which was a beautiful one, and ... it turned out that it was a wrong hypothesis. That doesn't mean that he wasn't a great man!"

Thomas Sowell: "He was one of the few people I know who had both genius and common sense."