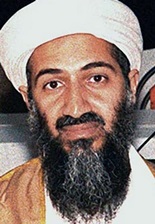 Quotes by and about Osama bin Laden

Bin Laden: "A man with human feelings in his heart does not distinguish between a child killed in Palestine or in Lebanon, in Iraq or in Bosnia. So how can we believe your claims ... while you kill our children in all of those places?"

Bin Laden: "People should rise above ... their differences and unite their efforts against their enemy."

Bin Laden: "Those who condemned the events [of 9/11] in isolation ... failed to connect them to past events and did not look at the causes that lead to this result. So their point of view is narrow."

Bin Laden: "[The American system] sacrifices soldiers and populations to achieve the interests of the major corporations." 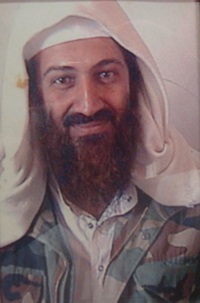 Bin Laden: "When [the Sudanese government] insisted ... that I should keep my mouth shut, I decided to look for a land in which I can breathe a pure, free air to perform my duty in enjoining what is right and forbidding what is wrong."

Gabriele Romagnoli: "We should give him credit for only one thing: Unlike other vile tyrants, he did not live in golden palaces, but avoided them."

Gilles Kepel: "His ... generosity, the simplicity of his behavior and his personal charm [were] legendary."

Najwa bin Laden: "I had never been around such a soft-spoken, serious boy."

Najwa bin Laden: "Despite his serene demeanor, no one ever thought of Osama as being weak-willed."

Najwa bin Laden: "Osama had always been unusually restrained in his manner and in his speech."

Najwa bin Laden: "[He had both a] gentle manner and [a] strong character."

Najwa bin Laden: "He [was] austere, believing that to be a good Muslim one must embrace simplicity. With this new way of thinking firmly in place, Osama decreed that our home furnishings should be plain, our clothing modest in number, and our food simple. The only area where Osama splurged was on his automobiles, which were always the latest models."


Barack Obama: "Most Indonesians had a higher opinion of Osama bin Laden than they did of George W. Bush."

Clive James: "Osama bin Laden has several of Trotsky's characteristics. ... Above all, he can inspire the young to dedicate their lives to an ideal."