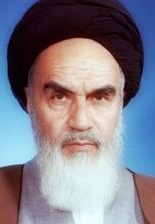 Quotes by and about Ruhollah Khomeini

James Tennen:"Khomeini was keenly focused on the state's moral and ideological foundation. He did not dwell on its actual functioning or the particulars of its management. ... Khomeini never put forward a definition of statecraft and economics."