Quotes by and about Warren Buffett

Buffett: "Over the years, a number of very smart people have learned the hard way that a long stream of impressive numbers multiplied by a single zero always equals zero."

Buffett: "I volunteered for the job of interim chairman. It's not what I want to be doing, but it will be what I will be doing until it gets done properly."

Buffett: "[I] can be very patient. No matter how great the talent or effort, some things just take time: you can't produce a baby in one month by getting nine women pregnant." 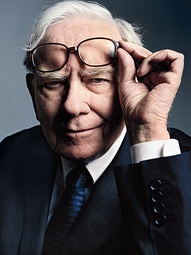 Buffett: "An investor [can] obtain superior profits ... only by carefully evaluating facts and continually exercising discipline."

Buffett: "An investor will succeed by coupling good business judgment with an ability to insulate his thoughts and behavior from the super-contagious emotions that swirl about the marketplace."

Buffett: "Any young person who doesn't take up bridge is making a big mistake."

Buffett: "My ideas about food and diet were irrevocably formed quite early - the product of a wildly successful party that celebrated my fifth birthday. On that occasion we had hot dogs, hamburgers, soft drinks, popcorn, and ice cream."

CNN: "[Buffett] doesn't encourage [the] managers [of his companies] to diversify. Managers are expected to concentrate on the businesses they know well so that Warren is free to concentrate on what he does well: Invest."

Bill Gates: "Warren's framework has been [consistent for 40 years] he has always looked at the world in terms of integrity."

Bill Gates: "[Buffett] introduced me to an intriguing analytic exercise that he does. He'll choose a year - say, 1970 - and examine the ten highest market-capitalization companies from around then. Then he'll go forward to 1990 and look at how those companies fared."

[Asked why Buffett was so successful at running his 70 companies:]
Bill Gates: "Because he's picked the manager who's dedicated to the details of the specifics of [each] business."

Susan Cain: "Buffett takes pride not only in his track record, but also in following his own 'inner scorecard.'"