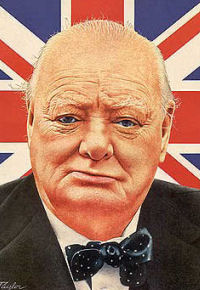 Quotes by and about Winston Churchill

Churchill: "[Early in my career] I resolved that as soon as [possible] I would free myself from all discipline and authority, and set up in perfect independence ... with nobody to give me orders or arouse me by bell or trumpet."

Churchill: "From very early youth I had brooded about soldiers and war, and often... I had imagined ... the sensations attendant upon being for the first time under fire. It seemed to [me] that it must be a thrilling and immense experience to hear the whistle of bullets all around and to play at hazard from moment to moment with death." 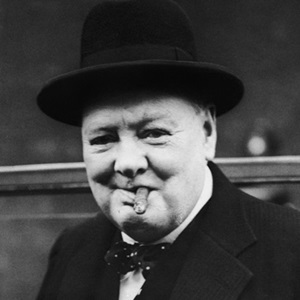 Churchill: "[Military training] was thrilling. It did seem such a pity that it all had to be make-believe, and that the age of wars between civilized nations had come to an end for ever. If it had only been 100 years earlier what splendid times we should have had! Fancy being nineteen in 1793 with more than twenty years of war against Napoleon in front of one!"

[On surviving a 29-feet fall:]
Churchill: "[It was due] to my own pronounced will-to-live."

Churchill: "Leaders [should show] the courage, the energy, the audacity, and readiness to run all risks and shoulder the responsibilities without which no great result in war can ever be achieved."

[Upon being criticized for speaking highly of Stalin:]
Churchill: "If Hitler invaded Hell, I would make at least a favourable reference to the devil in the House of Commons."

Churchill: "Who was Socrates, anyhow? A very argumentative Greek who had a nagging wife and was finally compelled to commit suicide because he was a nuisance!"