The Lion King character test is an unscientific and “just for fun” personality test that has achieved a surprising amount of popularity through the success of the Lion King franchise.

This version of The Lion King test will determine which of the eight Lion King characters you resemble the most, using real psychometric items.

What character from the Lion King do you resemble? For each of the following statements, indicate your level of agreement below.

People see me as an entertainer and a joker.

The IDRlabs Lion King Test (IDR-LKT©) was developed by IDRlabs International. The IDR-LKT utilizes characters from the Lion King franchise but is not in any way associated with Walt Disney Pictures, Disney Theatrical Productions, Disney Channel, or any executive producers or other professionals affiliated with Lion King. No infringement is intended by the present test.

The IDRlabs Lion King Test has been developed by professionals experienced with personality typology and psychological assessment. While the characters considered by this test are fictitious, this quiz does use genuine psychometric items and analysis to ascertain the test taker’s closest resemblance to one of eight possible character matches.

Tests related to the Lion King franchise, whether they are professional, educational, or free online quizzes such as this, are merely first glances at some aspect of your personality. In the case of the present test, your results will give you a clue as to your personality match with one of eight possible characters (Simba, Nala, Timon, Pumba, Scar, Mufasa, Zazu, and Rafiki). Generally speaking, no test ever created can match your personality with complete accuracy or replace educating yourself about the relevant personality theories and models. For more information regarding the above characters specifically, you can consult official Lion King franchise materials.

As a character test centered on the movie Lion King, the present test yields descriptions such as the following: Simba – Simba went through an entire journey to become who he was born to be. As a cub, he was quite inquisitive and adventurous. He was lively and very playful. He optimistically envisioned his future life as a king with much power and self-esteem. He could not wait to be free to exercise his autonomy, which later led to danger. Together with Nala, they went to the forbidden Elephant Graveyard, where they met the hungry hyenas. The young Simba defended Zazu and acted bravely when he told the hyenas to fight someone their own size. He also tried to protect Nala by making a roar to scare them away. The older Simba shows courage in confronting Scar and in engaging in a battle with the hyenas.

As the publishers of this free online test, we have striven to make the assessment as reliable, valid, and comprehensive as possible by subjecting it to statistical controls and validation. Before taking our online test, please remember that the results are provided “as-is” and should not be understood to be equal to a professional assessment, recommendation, or intervention of any kind. For more information about the current test or our other online psychological tests, please refer to our Terms of Service. 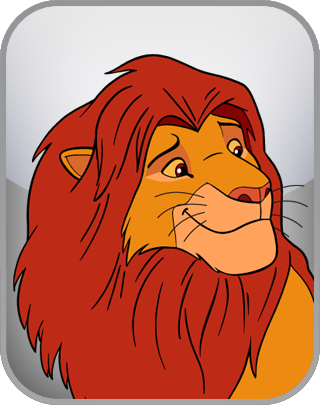 1. Free. This online Lion King Test is provided to you free of charge and will allow you to obtain your scores as related to eight major Lion King characters.

2. Based on real psychometric items. Unlike other Lion King character tests and quizzes that are available, this test was created using classic psychometric items and is supported by time-honored models of personality theory.

3. Statistical controls. Scores for the present test are entered into an anonymized database. Statistical analysis of the quiz is performed to ensure maximum validity and accuracy of the results.

4. Developed by professionals. The current Lion King Test was created by researchers and psychology professionals who work with psychometrics.