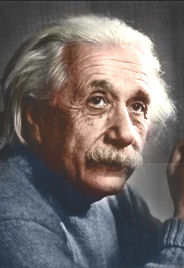 Quotes by and about Albert Einstein

Einstein: "It is always amusing for me to observe that even those who do not believe in [Freud's] theories find it so difficult to resist [his] ideas that they use [his] terminology in their thoughts and speech when they are off guard."

Einstein: "The normal objective of my thought affords no insight into ... human will and feeling. ... There are certain psychological [truths] whose existence [I] may dimly surmise, but whose interrelations and vagaries [I am] incompetent to fathom." 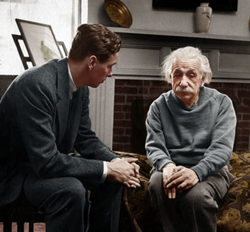 Einstein: "I am convinced that almost all great men ... share the same ideals. But they have little influence on the course of political events. ... The fate of nations is inescapably in the hands of wholly irresponsible political rulers ... [who] cannot be regarded as representative of the superior moral or intellectual elements in a nation. ... The intellectual elite does not exercise any direct influence on the history of the world."

Einstein: "[I am] immune from nationalist bias."

Einstein [in a personal letter to a high school student:] "Do not worry about your difficulties in Mathematics. I can assure you mine are still greater."

C.G. Jung: "Einstein is so very concentrated on his own ideas."

Einstein [to Niels Bohr:] "Not often in life has a human being caused me such joy by his mere presence as you did."

Impose Magazine: "Einstein [and] Bohr ... got into such a heated discussion on a street car once that they missed their stop, and missed it again on their way back to catch it."

Richard H. Jones: "Einstein is often cited as a mystic, but ... [he was] simply someone awed by the orderliness of all of nature. Indeed he scoffed at the idea of being a mystic."

Wolfgang Pauli: "In all the innovations he has given us in physics he has in some sense remained faithful to the past."