Quotes by and about Ann Coulter

Coulter: "I'm a Christian first, and a mean-spirited, bigoted conservative second, and don't you ever forget it."

[Asked if Jesus would want her to be nicer to her political opponents:]
Coulter: "Who knows? Maybe he'll say I was too tough or maybe he'll chastise me for not being tough enough on those who hate him."

[Asked what she enjoys most about her work:]
Coulter: "The prospect of having an impact on the public debate. Irritating liberals is a close second."

Coulter: "To those of you out there who have yet to be offended by something I have said: Please be patient. I am working as fast as I can." 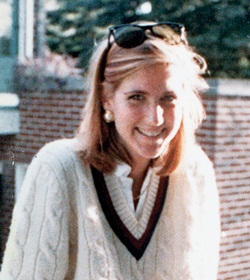 Coulter: "All I can do is live my life according to my understanding of what God wants of me."

Coulter: "[My] reaction the first time I read the Bible [was]: Sure, it's fascinating and wise and full of important information, but what was the point of it exactly?"

Coulter: "If you think that Christianity is tough on homosexuality, you should hear what ... the Muslims do to them." 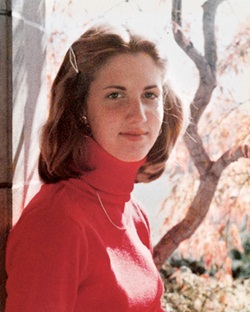 Coulter: "I think there should be a literacy test and a poll tax for people to vote."

Coulter: "It would be a much better country if women did not vote. ... Women have no capacity to understand how money is earned."

Coulter: "I am not a suck-up kind of person."

Coulter: "[My father] was of the old school, a man of few words, the un-Oprah, no crying or wearing your heart on your sleeve, and reacting to moments of great sentiment with a joke. Or as we used to call them: men."

Coulter: "Besides being very funny, Father had an absolutely straight moral compass without ever being preachy or judgmental or even telling us in words. He just was good." 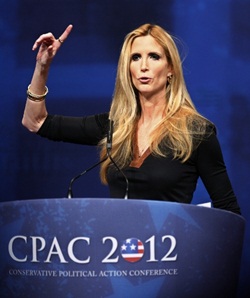 Coulter: "[My mother] was ... such a 'gentle lady' that [in her old age] I had to go to her doctors' appointments and hospital visits with her and be her Mother Lion. If officious hospital administrators had told Mother to get off a gurney, go outside in the pouring rain and stand on one foot for three hours before the doctor would see her, she'd thank them profusely and apologize for being such a bother. She [also] viewed her doctors' appointments as social visits, which is the other reason I'd have to go with her, to make sure we eventually got around to the business end of the appointment."

The Times: "Ann Coulter can sling out barbs faster than Zeus can sling lightning bolts."

Eric Alterman: "The idea that she doesn't coarsen our culture and make it more difficult to speak complicated truths is nonsense."

The Independent: "Her view of what constitutes an argument seems to be a distinctly one-sided affair."