Quotes by and about Aristotle

Aristotle: "Socrates says that harmful deeds stem from ignorance. I disagree: Men are perfectly capable of committing harmful deeds while knowing full well what evil they cause."

Aristotle: "They should rule who are able to rule best."

Aristotle: "It is necessary and proper that some people should rule while others should be ruled over."

Aristotle: "Some are intended by nature to be lord and master while ... [others] a slave."

Aristotle: "Education ... veils the poverty of the poor."

Aristotle: "[Excellence in fiction-writing is to] handle irrationalities; to disguise them behind other good qualities, so as to allow them to exist." 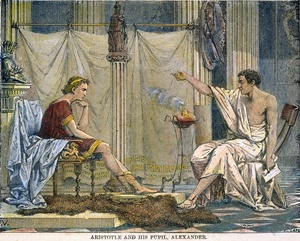 Aristotle: "Law is order, and good law is good order."

Aristotle: "The good and the well is thought to reside in the function, so would it seem to be for man, he [must have] a function."

Aristotle: "It is possible to fail in many ways ... but only possible to succeed in one way ... just like missing the mark is easy, but hitting it difficult."

Aristotle: "Anybody can become angry, that is easy; but to be angry with the right person, and to the right degree, and at the right time, for the right purpose, and in the right way, that is not within everybody's power and is not easy."

Aristotle: "The human lot is to always choose the lesser of two evils."

Aristotle: "Intelligence is a means to a profitable life."

Aristotle: "It is unjust for unequals to receive equal rewards."

Aristotle: "In educating the young we steer them by the rudders of pleasure and pain."

Aristotle: "Reason is superior [to other faculties] because it aims at no end that is beyond itself."

Aristotle: "It would be absurd to try to prove ... what is obvious by what is not. This is the mark of a man who is unable to distinguish what is self-evident from what is not. ... This applies to the arguments of both Melissus and of Parmenides."


Aristotle and Plato on Beautiful Writing

Aristotle: "Skill in language has a small ... role to play [in so far] as the manner in which something is explained affects its comprehensibility. But fine speaking is not important and is really just a show put on to appeal to the listener. After all, no one uses grand language when teaching mathematics."

Dionysius of Halicarnassus: "Even at the age of 80, Plato did not stop combing, curling and braiding his dialogues. Every philosopher knows about the loving care he took with them. The story about his writing tablet is especially familiar: After his death, the opening words of 'The Republic,' 'Yesterday I went down to Piraeus with Glaucon, the son of Ariston,' were found on it with all sorts of changes."

J.C. McKeown: "It is the rhythm, not the content, of the sentence that Plato was aiming to perfect."


Anthony Kenny: "Extrovert philosophers ... look to Aristotle as their champion."

Alfred Korzybski: "The ... system of the extrovert Aristotle was accepted in favor of the introverted Plato."

Alfred Korzybski: "Aristotle was a typical extrovert, who projects all his internal processes on the outside world and objectifies them."

Thomas McEvilly: "[Aristotle] argues against Socrates, [positing] that the aim is not to find out intellectually what virtue is, but to get virtue [and] to act virtuously."

Heinrich Heine: "[Plato is] visionary and mystical. ... [Aristotle is] practical and orderly."

Heinrich Heine: "[Aristotle] builds out of ideas a fixed system."

Heinrich Heine: "Plato and Aristotle! These are not merely two systems, they are types of two distinct human natures."

C.G. Jung: "Aristotle was entirely a man of reality."

Anthony Gottlieb: "Socrates, Plato, and Aristotle have often been lumped together, yet were there ever three more different men?"

John Palmer: "Aristotle did not believe that as much precision was possible in Ethics as in other sciences."

Aelian: "Plato used to call Aristotle 'Colt.' What did he mean by this name? As everyone knows, a colt kicks its mother as soon as it has had enough milk. So Plato was hinting at a degree of ingratitude in Aristotle. When Aristotle had received fiom Plato the greatest seeds of philosophy and the greatest introduction to the discipline and was full up with the best things Plato had to offer, Aristotle pulled against the reins; taking his friends with him, he set up a different school and declared himself Plato's rival."

Maria Elena Diaz: "When dealing with [pre-Socratic] thinkers [Aristotle] does not show interest in the interpretation of their texts, but [only] in what they have contributed to the problems that arouse his own philosophical interest."

Pilar Spangenberg: "Unlike [Plato], Aristotle does not have a filial relationship with earlier philosophers. On the contrary, he assumes the role of a severe and fair father who, faced with their philosophical mumblings, points out wise moves and corrects deviations."

Pilar Spangenberg: "With regard to Parmenides, Aristotle is not as cold as when, for example, he criticizes Plato."

Pilar Spangenberg: "Aristotle states that Parmenides is ... more interesting than ... all other monistic thinkers. ... He mentions Xenophanes and Melissus, who, he affirms, are more 'rustic.'"

John Douglas Turner: "[Unlike with Plato] according to Aristotle, matter is not the principle of evil or the source of disorder. Privation or lack of form is a real force - both positive and negative - in the physical world."

Bertrand Russell: "After [Aristotle's] death, it was 2000 years before the world produced any philosopher who could be regarded as approximately his equal."

George Henry Lewes: "The existence of Evil is no perplexity to [Aristotle's] soul; it is accepted as a simple fact. Instead of being troubled by it, saddened by it, he quietly explains it as the consequence of Nature not having correctly written her meaning. This mystery which has darkened so many sensitive meditative minds with anguish he considered to be only bad orthography."