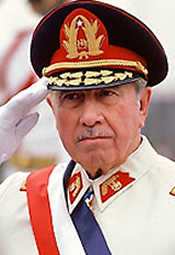 Quotes by and about Augusto Pinochet

Pinochet: "Rome cut off the heads of Christians and they continued to reappear one way or another. Something similar happens with Marxists." 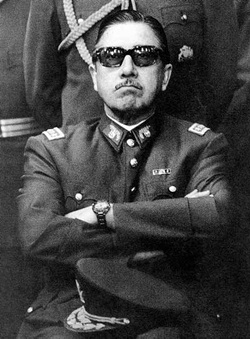 Pinochet: "Everything I do, I do for my country. ... I don't have any greater ambitions in my life."

Pinochet: "I am clear in my mind that the return of Chile to a true democracy, and from that the true freedom to which all individual people are entitled, could not have been achieved without the removal of the Marxist government."

[Asked how he would like to be remembered:]
Pinochet: "As a man who loved his Fatherland, and served it all his life. I am eighty years old, and I know nothing else but service. I hope that they do justice to my memory."

The New Yorker: "[In London, Pinochet] bought some books about Napoleon, and was delighted when, during a stop at Burberry's, the head salesman recognized him and was courteous." 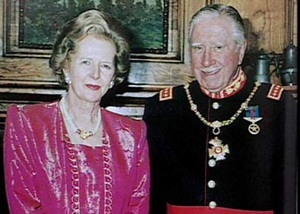 The Telegraph: "[Thatcher] never made any secret of the fact that [she and Pinochet] were connected."

Henry Kissinger, to Pinochet: "We [in Washington] want to help you, not undermine you."

The New Yorker: "[Pinochet was fascinated with history and] expressed his admiration for Napoleon and for the Romans."

The New Yorker: "Pinochet ... prides himself on being a man of simple tastes, and impeccably honest. When a public outcry greeted his use of state funds to build a huge new Presidential mansion [on a] hilltop. ... Pinochet was mortified, and never took up residence there."

Jonah Goldberg: "I think all ... informed people can agree: It would be great if the U.S. could find an Iraqi Augusto Pinochet."

The New Yorker: "He has few modern parallels, except perhaps Francisco Franco. ... Like Franco, Pinochet is an ultra-conservative Catholic nationalist, a military officer ... who suddenly rose to prominence."

The New Yorker: "Pinochet was the only foreign head of state to attend Franco's funeral."