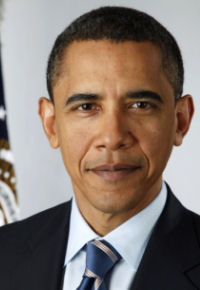 Quotes by and about Barack Obama

Obama: "[As President] you can't wander around. It's much harder to be surprised. You don't have those moments of serendipity. You don't bump into a friend in a restaurant you haven't seen in years. ... The loss of surprise is an unnatural state. You adapt to it, but you don't get used to it - at least I don't."

Obama: "Nothing comes to my desk that is perfectly solvable. Otherwise, someone else would have solved it. So you wind up dealing with probabilities. Any given decision you make you'll wind up with a 30 to 40 percent chance that it isn't going to work. You have to own that and feel comfortable with the way you made the decision. You can't be paralyzed by the fact that it might not work out."

Obama: "I'm impatient about the pace of change."

Obama: "I cannot swallow whole the view of Lincoln as the Great Emancipator."

Doris Kearns Goodwin: "Do you think of yourself as an extrovert?"

Obama: "No. On the spectrum of successful politicians, I'm not introverted the way some have been, but I'm not an F.D.R. or a Bill Clinton, who are just constantly ..."

Doris Kearns Goodwin: "Needing the people all the time."

Obama: "... in a crowd and just relishing it. I like my quiet time. There is a writer's sensibility in me sometimes, where I step back. But I do think that I am generally optimistic. I see tragedy and comedy and pain and irony and all that stuff. But in the end I think life is fascinating, and I think people are more good than bad, and I think that the possibilities of progress are real."


Obama: "In some ways, [Michelle and I] saw in each other elements that we hadn't had growing up. In Michelle I saw roots. I saw a nuclear family, neighborhood, community, continuity. In me she saw adventure, cosmopolitanism."

Michelle Obama: "Barack has helped me loosen up and feel comfortable with taking risks, not doing things the traditional way. ... I'm more traditional; he's the one in the couple that, I think, is the less traditional individual. ... He's just more out there, more flamboyant."

[Ex-girlfriend #1, in a letter to Barack Obama:] "I feel that you carefully filter everything in your mind and heart - legitimate, admirable, really - a strength, a necessity in terms of some kind of integrity. But there's something also there of smoothed veneer, of guardedness ... but I'm still left with this feeling of ... a bit of a wall - the veil. Barack - still intrigues me, but so much going on beneath the surface, out of reach. Guarded, controlled."

[Ex-girlfriend #2:] "[With Barack I feel] distance, distance, and wariness."

[Ex-girlfriend #2:] "His warmth can be deceptive. Though he speaks sweet words and can be open and trusting, there is also that coolness - and I begin to have an inkling of some things about him."

[Asked what he learned about Obama that he didn't already know after talking with him in person:]
Ta-Nehisi Coates: "He's really smart. ... And I guess I knew that, but what is said about him often is that he's professorial. But that gives you this picture of a guy giving a lecture. My perception was that he was literally thinking it out as he was talking - that he didn't have canned, prepared answers. I was shocked by how much he wanted to talk about these things. People say the president runs away from these issues, but I don't think that's true."

Ta-Nehisi Coates: "He has a deeply curious and active mind."

Martin Rosenberg [former student of Obama:] "[When he taught constitutional law] he wanted all voices to be heard in the classroom, and when there a viewpoint that wasn't being expressed or students were too complacent in their ... views, he'd push the contrary view himself."

Martin Rosenberg [former student of Obama:] "He never taught the class as though he knew the answers to all the questions he was posing."

The Atlantic: "[As president] he has ... been eager to question some of the long-standing assumptions undergirding traditional U.S. foreign-policy thinking. To a remarkable degree, he is willing to question why America's enemies are its enemies, or why some of its friends are its friends."

Peggy Noonan: "[Negotiations with Republicans] will no doubt continue, but there is an Obama problem there, and it's always gotten in the way. He really dislikes the other side, and can't fake it. This is peculiar in a politician, the not faking it."

Peggy Noonan: "He doesn't bother to show warmth and high regard. ... In this he is [unlike] Clinton. ... Obama is different, not a political practitioner ... not a warm-blooded animal but a cool, chill character."

Larry Summers [adviser to Obama 2008-2010:] "[Unlike Clinton] Obama doesn't have the joy of the game. Clinton basically loved negotiating with a bunch of other pals about anything. [Whatever had to do with people] Clinton would think was pretty interesting - and kind of fun. Whereas Obama - he really didn't like [people]."

Derek Knowles: "Obama ... is not particularly warm or gregarious. Nor does he show much evidence of positive emotion, even when winning a historic election or a Nobel Prize."

Bob Woodward: "As Reagan had, president Clinton had employed congressional liaison staff across Capitol Hill to develop relationships and create trust. But [under] the Obama administration there was virtually no outreach or contact."

Foreign Affairs: "Obama has a keen legal mind, which serves him ... well when he pokes holes in specious arguments."

Vanity Fair: "The Pentagon ... presented the president with two options: establish a no-fly zone [over Libya] or do nothing at all. The idea was that the people in the meeting would debate the merits of each, but Obama surprised the room by rejecting the premise of the meeting. 'He instantly went off the road map,' recalls one eyewitness. 'He asked, 'Would a no-fly zone do anything to stop the scenario we just heard?'' After it became clear that it would not, Obama said, 'I want to hear from some of the other folks in the room.' Obama then proceeded to call on every single person for his views, including the most junior people. 'What was a little unusual,' Obama admits, 'is that I went to people who were not at the table. Because I am trying to get an argument that is not being made.' The argument he had wanted to hear was the case for a more nuanced intervention - and a detailing of the more subtle costs to American interests of allowing the mass slaughter of Libyan civilians. His desire to hear the case raises the obvious question: Why didn't he just make it himself? 'It's the Heisenberg principle,' he says. 'Me asking the question changes the answer.'"

[On Obama's handling of Syria:]
Garry Kasparov: "Obama has not recognized the value of the 'Red Line' phrase that he used. Red Line means ... that if it is crossed, you shoot. You are no longer discussing. ... You act. But Obama [doesn't] want to act."

Peter J. McCusker: "Saying that Barack Obama has identity conflicts ... is like saying that Bill Gates has earned a few bucks."

Peter J. McCusker: "Obama never has had any compunction against saying one thing and doing another."

Peter J. McCusker: "[He is a] demagogue [who] obamafuscates discussion."

Peter J. McCusker: "[He] manipulates everyone in sight with impunity."

Peter J. McCusker: "[He has an] arrogant, elusive demeanor."

The Washington Post: "Michelle often [teases] Barack in public in an attempt to make him appear more likeable."

National Review Magazine: "He is guarded and reluctant to trust others. He is competitive, even ruthless. Other people are just pawns in his game. He often feels superior to others. He is cynical about others' motives, because he knows that his own motives are impure."

Journal of Political Psychology: "Barack Obama remains a mystery to many people."

Robert Gates: "During my tenure as Secretary [of Defense] Bush was willing to disagree with his senior military advisers on the wars. ... However, Bush never ... questioned their motives or mistrusted them personally. Obama was respectful of senior officers and always heard them out, but he often disagreed with them and was deeply suspicious of their actions and recommendations. Bush seemed to enjoy the company of the senior military; I think Obama considered time spent with generals and admirals an obligation."

Robert Gates: "I worked for Obama longer than Bush and I never saw his eyes well up."