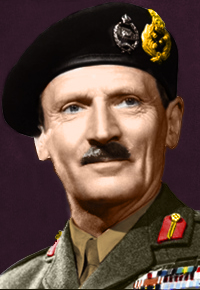 Quotes by and about Bernard Montgomery

Montgomery: "Discipline strengthens the mind so that it becomes impervious to ... fear."

Montgomery: "Every soldier must know, before he goes into battle, how the little battle he is to fight fits into the larger picture, and how the success of his fighting will influence the battle as a whole."

Montgomery's conception of the individual soldier needing to understand the strategy is the same as that of Saddam Hussein: "If a soldier does not see the logic he will not perform as well or be as obedient. A soldier must be convinced, otherwise discipline is a problem."


[To Eisenhower during a tour of the Gettysburg battlefield in 1957:]
Montgomery: "Lee and Meade should have been sacked!" 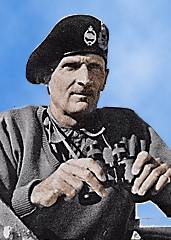 Montgomery: "When I told a senior officer ... that I must have a new head gunner, he remarked that the present man was a delightful person and was also a golf champion. I agreed he was delightful, but added that unfortunately the game we were about to play was not golf."

[On the bureaucratization of modern warfare:]
Montgomery: "This accursed war [WW2] will surely be over by 1948 because by then there'll be no more paper left on the planet!"

[Diary entry:]
Montgomery: "My first day in the desert had been a very good one, though long and tiring. I'm afraid that it was with an insubordinate smile that I fell asleep: I was issuing orders to an army which someone else reckoned he commanded!"

[On assuming command:]
Montgomery: "It seemed to me that [the men needed] not only a master but a mascot. I deliberately set about fulfilling this ... requirement. ... This analysis may sound rather impersonal, a decision made in the study. And so, in origin, it was." 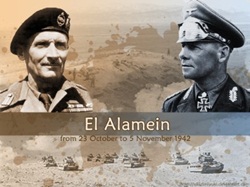 Montgomery: "A battle is, in effect, a contest between two wills - your own and that of the enemy general."

Brian Horrocks: "Monty was not such a dashing, romantic figure as his opponent [i.e. Rommel]."

Montgomery: "[As a child] if I could not be seen anywhere [my mother] would say, 'Go and find out what Bernard is doing and tell him to stop it.'" 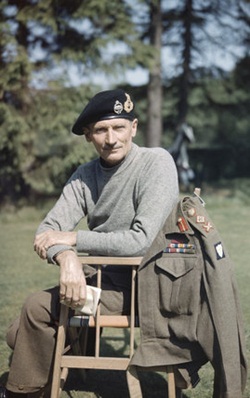 Montgomery: "The matter of 'decision' is vital. The modern tendency is to avoid taking decisions, and to procrastinate in the hope that things will come out all right in the wash."

Montgomery: "I spent a great deal of time in consideration of [the] human problem. I always used for each job in the master plan the general and the troops best fitted for that particular task. ... Probably a third of my working hours were spent in the consideration of personalities."

Montgomery: "Probably one of the greatest assets a commander can have is the ability to radiate confidence in the plan and operations."

Brian Horrocks: "[Montgomery] was known to be ruthlessly efficient, but somewhat of a showman."

Brian Horrocks: "I knew him by reputation. ... Except with those who had served under him [he was] not a popular figure."

Brian Horrocks: "[One did not] find him leading a forlorn hope in person, for the simple reason that if he was in command forlorn hopes did not occur."

Brian Horrocks: "He planned all his battles most carefully."

Montgomery: "I have never discovered what Churchill thought of me that day [when we first met]; I know I was immensely impressed by him."

Montgomery: "[When I met Churchill during the early stages of the war I protested that] my division was immobile. It was ... the only division fit to fight. ... And here we were in a static role, ordered to dig in on the south coast. [I said that] some other troops should take on my task; my division should be given buses, and be held in mobile reserve with a counter-attack role. ... The Prime Minister thought this was the cat's whiskers. I do not know what the War Office thought; but I got my [wish]."

[Diary entry:]
Montgomery: "My first encounter with Rommel was of great interest. ... I feel that I have won the first game, when it was his service. Next time it will be my service, the score being one-love."

Montgomery: "In battle ... no two situations are ever the same; each must be tackled as a wholly new problem to which there will be a wholly new answer."

Montgomery: "[A commander] has got to strive to read the mind of his opponent, to anticipate enemy reactions to his own moves, and to take quick steps to prevent enemy interference with his own plans. He has got to be a very clear thinker and able to sort out the essentials from the mass of factors which bear on every problem."

... so that the master plan can be implemented smoothly and quickly?"

Montgomery: "Bottled up in men are great emotional forces which have got to be given an outlet in a way which is positive and constructive, and which warms the heart and excites the imagination. If the approach to the human factor is cold and impersonal, then you achieve nothing."