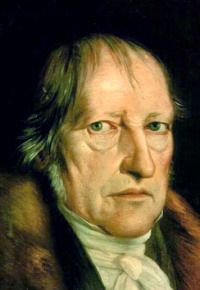 Quotes by and about G.W.F. Hegel

Hegel: "To be able to read Homer in their own language is the greatest gift that can be given to a people."

Hegel: "The force of mind is only as great as its expression."

Hegel: "To be a follower of Spinoza is essential. ... You are either a Spinozist or not a philosopher at all."

Hegel: "Kant is a rabid expression of what Socrates started."

Hegel: "Dialectics gives expression to a law which is felt in all grades of consciousness and in general experience. Everything that surrounds us may be viewed as an instance of dialectic."

Hegel: "Poetry is the universal art of the spirit which has become free in itself and which is not tied down ... to external sensuous material; instead, it launches out exclusively in the inner space and the inner time of ideas and feelings."

Hegel: "The heart is everywhere, and each part of [an] organism is ... of the heart itself."

Walter Kaufmann: "[In his books] Hegel offers us what Richard Wagner was later to call a Gesamtkunstwerk [total work of art], leaving out little but music."