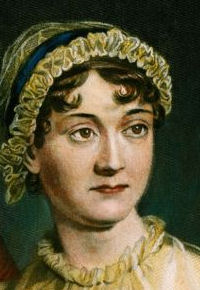 Quotes by and about Jane Austen

Austen [in a letter to her sister:] "I often wonder how you can find time for what you do, in addition to the care of the house; and how good Mrs. West could have written such books ... with all her family cares, is still more a matter of astonishment! Composition seems to me impossible with a head full of joints of mutton and doses of rhubarb."

Austen [in a letter to her niece:] "I am to take the Miss Moores back on Saturday. ... Though I like Miss H. M. as much as one can at my time of life after a day's acquaintance, it is uphill work to be talking to those whom one knows so little. Only one comes back with me tomorrow, probably Miss Eliza, and I rather dread it. We shall not have two ideas in common. She is young, pretty, chattering, and thinking chiefly, I presume, of dress, company, and admiration."

Austen [in a letter to her niece:] "But how could it possibly be any new idea to you that you have a great deal of imagination? You are all over imagination. The most astonishing part of your character is that with so much imagination, so much flight of mind, such unbounded fancies, you should have such excellent judgement in what you do! Religious principle I fancy must explain it."

Lord David Cecil: "Many authors start writing in order to relieve their private feelings; Jane Austen began in order to contribute to family entertainment. Her early works were examples of a family activity."

PBS Television: "Jane Austen grew up in a highly literate family. ... Within the walls of their household she was encouraged to write."

Claire Tomalin: "[She lacked] tenderness towards herself as much as towards others."

Claire Harman: "She wasn't necessarily a nice person at all. There's really nothing in the letters to suggest anything other than a very sharp-witted and at times rather acid-tongued woman. And the mind behind the novels could only be a very discerning, very critical mind. The famed irony of Austen's novels is really a way of saying that she was quite cynical and very worldly."

[Austen's niece:] "Her unusually quick sense of the ridiculous inclined her to play with the trifling commonplaces of everyday life, whether as regarded people or things; but she never played with its serious duties or responsibilities - when grave she was very grave."


A Contemporary's Impression of Austen

Mary Russell Mitford [recounting a friend's experience of meeting Austen, in 1815:] "A friend of mine, who visits her now, says that she has stiffened into the most perpendicular, precise, taciturn piece of 'single blessedness' that ever existed."

Mary Russell Mitford: "Till 'Pride and Prejudice' showed what a precious gem was hidden in that unbending case, she was no more regarded in society than a poker or fire-screen, or any other thin upright piece of wood or iron that fills its corner in peace and quietness. The case is very different now; she is still a poker - but a poker of whom everyone is afraid."

Mary Russell Mitford: "Most writers are good-humored chatterers - neither very wise nor very witty - but nine times out of ten ... unaffected and pleasant, and quite removing by their conversation any awe that may have been excited by their works. But a wit, a delineator of character, who does not talk, is terrific indeed!"


The Washington Post: "To categorize Austen as simply a writer of romantic fiction is foolish. Austen is cynical where most romance is hopeful."

The Washington Post: "Her characters are often deeply flawed. Her world may be, on the surface, one of cottages and vast lawns and graceful flowers, but it is really an interior world, one she renders, unsparingly, with a masterful level of social observation."

W.D. Howells: "Her novels ... [were] nothing more and nothing less than the truthful treatment of material. ... [Austen] was the first and the last of the English novelists to treat material with entire truthfulness."

G.K. Chesterton: "It was precious little of the truth that was protected from her."

Anthony Trollope: "In the comedy of folly I know no novelist who has beaten her."

Sam Bailey: "Extreme passions are usually avoided in her writing, and this becomes noticeable when, for example, she moves to a very impersonal, abstract voice when Elizabeth accepts Darcy: Elizabeth 'immediately, though not very fluently, gave him to understand that her sentiments had undergone so material a change ... as to make her receive with gratitude and pleasure his present assurances.' People who dislike Austen's works often cite this lack of extreme emotions as their main reason."

Charlotte Bronte: "[Pride and Prejudice is] a carefully fenced, highly cultivated garden, with neat borders and delicate flowers; but no glance of a bright, vivid physiognomy, no open country, no fresh air, no blue hill, no bonny beck."

Charlotte Bronte: "Anything like warmth or enthusiasm, anything energetic, poignant, heartfelt, is utterly out of place in commending [Austen's] works: all such demonstrations the authoress would have met with a well-bred sneer, would have calmly scorned as outré or extravagant."

Charlotte Bronte: "She does her business of delineating the surface of the lives of genteel English people curiously well. There is a Chinese fidelity, a miniature delicacy, in the painting. She ruffles her reader by nothing vehement, disturbs him with nothing profound. The passions are perfectly unknown to her: she rejects even a speaking acquaintance with that stormy sisterhood. ... What sees keenly, speaks aptly, moves flexibly, it suits her to study: but what throbs fast and full, though hidden, what the blood rushes through, what is the unseen seat of life and the sentient target of death - this Miss Austen ignores. ... Jane Austen was a complete and most sensible lady, but a very incomplete and rather insensible (not senseless) woman, if this is heresy - I cannot help it."

Lilia Melani: "Bronte's preference for passion over reason in fiction is not uncommon. Horace Walpole suggested a principle that explains the differing responses of Austen and Bronte to life and writing novels: 'This world is a comedy to those who think, a tragedy to those who feel.' Building on this comment, Ian Watt suggested that Jane Austen's novels, which are comedies, 'have little appeal to those who believe thought inferior to feeling.'"


Claire Harman: "She's such an intellectual and she's writing love stories, so you get a wonderful combination of very clear thinking, very astute analysis of society and of human nature. And her jokes are terribly funny."

Claire Harman: "She really took out of the 18th century all the flimflam and the verbosity that had held it back. ... She modernized the novel single-handedly ... by making it shorter, more streamlined, funnier."

Claire Harman: "Austen was certainly 'without poetry'; she eschewed extravagant language, heightened emotions, dramatic situations, and any but the sparest descriptive passages."

Mark Twain: "[She] is entirely [unreadable]. It seems a great pity that they allowed her to die a natural death."

Mark Twain: "Every time I read 'Pride and Prejudice' I want to dig her up and hit her over the skull with her own shin-bone."


G.H. Lewes: "She never stirs the deeper emotions [and] she never fills the soul with a noble aspiration."

Elaine Johnson: "In many ways, Jane Austen's detached, ironic style was an antithesis of the Romantic ideal."

Virginia Woolf: "Jane Austen looked at [the failure of other writers and] devised a perfectly natural, shapely sentence proper for her own use and never departed from it. Thus, with less genius for writing than Charlotte Bronte, she got infinitely more said."

Virginia Woolf: "[A close reading reveals] stiffness and the bareness ... she was one of those writers who lay their facts out rather baldly in the first version and then go back and back and back and cover them with flesh and atmosphere."

Virginia Woolf: "[She] cuts out [her characters'] silhouettes. ... But there they remain; no excuse is found for them and no mercy shown them."

Virginia Woolf: "She is impersonal; she is inscrutable."

Virginia Woolf: "Sometimes it seems as if her [characters] were born merely to give Jane Austen the supreme delight of slicing their heads off."


Bertrand Russell: "Every housemaid expects at least once a week as much excitement as would have lasted a Jane Austen heroine throughout a whole novel."

[Referring to the Napoleonic Wars:]
Austen: "How horrible it is to have so many people killed! And what a blessing that one cares for none of them!"

Austen [in a letter to her sister]: "You are very kind in [suggesting] presents for me to [give] ... but as I do not choose to have generosity dictated to me, I shall not [give anything] till the first thought of it has been my own."

Austen [in a letter to her sister]: "You deserve a longer letter than this; but it is my unhappy fate seldom to treat people so well as they deserve."

Austen: "I must keep my own style and go on in my own way."