Quotes by and about Mark Zuckerberg

Zuckerberg: "Young people are just smarter. Why are most chess masters under 30?"

Zuckerberg: "There are [very few] people in the world who have decent ideas."

Zuckerberg: "I often say ... that my goal was never to just create a company. A lot of people misinterpret that, as if I don't care about revenue or profit or any of those things. But what not being just a company means to me is not being just that - building something that actually makes a really big change in the world."

Zuckerberg: "The question I ask myself like almost every day is 'Am I doing the most important thing I could be doing?' ... Unless I feel like I'm working on the most important problem that I can help with, then I'm not going to feel good about how I'm spending my time. And that's what this company is."

Zuckerberg: "I know it sounds corny, but I'd love to improve people's lives."

Zuckerberg: "A bunch of people told me that even though they loved eating pork, they really didn't want to think about the fact that the pig used to be alive. ... I think they should take responsibility ... rather than trying to ignore where it came from."

Zuckerberg: "A squirrel dying in your front yard may be more relevant to your interests right now than people dying in Africa."

[Female Facebook employee:] "I'll often ask him for advice about, like, a girl issue that I'm dealing with. And he'll very rationally give me his opinion on the situation."

[His father:] "If Mark asked for something, yes by itself would work, but ... if you were going to say no, you had better be prepared with a strong argument backed by facts, experiences, logic, reasons."

David Kirkpatrick: "[Zuckerberg] had a way of punctuating a conversation, when it reached a critical moment, by suddenly pronouncing, 'Now you know who you're fighting!'"

Steve Jobs: "I admire Mark Zuckerberg ... for not selling." 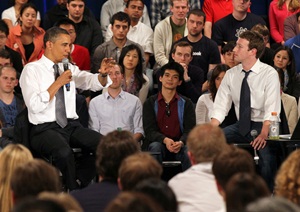 Barack Obama [at a town hall meeting with Zuckerberg:] "My name is Barack Obama, and I'm the guy who got Mark to wear a jacket and tie."

Sean Parker: "Watching what happened [when Facebook in 2005 enabled photo uploading which became wildly popular] was a key part of what led Mark's vision to crystallize. He was formulating a broader and broader theory about what Facebook really was."

David Kirkpatrick: "[In September 2006] Zuckerberg's stature as a leader soared at Facebook. Many employees even began to view him with a touch of awe. Everyone knew he had been resolute about both [the introduction of the] News Feed and open registration [both of which had met skepticism and resistance but had turned out to be great successes]."

Naomi Gleit: "[Zuckerberg] was just two steps ahead of everybody else. [With the News Feed and open registration] he had pushed the company, and gotten lots of negative feedback. But he had been right."

Chris Cox: "Mark would rather see [Facebook] fail in an attempt to do what [he thinks] is right and to do something great and meaningful, than be a big, lame company."

David Kirkpatrick: "Some weekends ... Zuckerberg could ... be found reading Peter Drucker, the consultant and teacher often called the father of modern management."