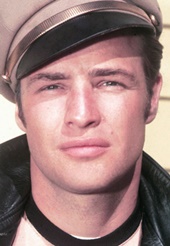 Quotes by and about Marlon Brando

Brando: "I've never had any respect for Hollywood. It stands for greed, avarice, phoniness, crassness."

Brando: "A sensitive person receives 50 impressions where somebody else may only get seven. Sensitive people are so vulnerable; the more sensitive you are, the more certain you are to be brutalized, develop scabs. Never evolve. Never allow yourself to feel anything, because you always feel too much."

Brando: "I used to sit ... looking out the window at people walking by. I saw them for perhaps two or three seconds before they disappeared. ... In that flick of time I studied their faces, the way they carried their heads and swung their arms; I tried to absorb who they were - their history, their job, whether they were married, troubled or in love."

Brando: "I was the antithesis of [my character in 'A Streetcar Named Desire'] Stanley Kowalski. I was sensitive by nature and he was coarse, a man with unerring animal instincts and intuitions."

Brando: "There's a line in the picture ['The Wild One'] where [my character] snarls, 'Nobody tells me what to do.' That's exactly how I've felt all my life."

Brando: "After I had some success, Lee Strasberg tried to take credit for teaching me how to act. He never taught me anything. He would have claimed credit for the sun and the moon if he believed he could get away with it. He was an ambitious, selfish man who exploited the people who attended the Actors Studio, and he tried to project himself as an acting oracle and guru. Some people worshiped him, but I never knew why. To me he was a tasteless and untalented person whom I didn't like very much."

Brando: "An actor is at most a poet and at least an entertainer."

Brando: "I've always found animals easy to love because their love is unconditional. They are trusting, loyal and undemanding except in wanting love in return."

[David Letterman: "Is Marlon Brando a fun guy to be around?"]
Francis Ford Coppola: "Very much so. He's a wonderful man. He's really like a big kid in a way. And extremely intelligent. Beyond his talent for his films, you can talk to him about all kinds of things and really feel you come away having learned something."

Francis Ford Coppola: "Marlon Brando is like a kid. And he loves children. To see him play with kids is a wonderful thing to see."

Francis Ford Coppola: "Marlon has one of the finest minds around: thinking is what he does. To sit and talk with him about life and death - he'll think about that stuff all day long."

New York Times: "Certainly among the handful of enduringly great American film actors - some say the greatest - [Marlon Brando] has also been, without question, the most widely imitated. Virtually all of the finest male stars who have emerged in the last half-century, from Paul Newman to Warren Beatty to Robert De Niro to Sean Penn, contain some echo of Mr. Brando's paradigm. Simply put, in film acting, there is before Brando, and there is after Brando. And they are like different worlds."

Richard Schickel: "[It was Brando who] permitted actors to go beyond characterizations that were merely well made ... allowed them to play not just a script's polished text but its rough, conflicting subtext as well."

New York Times: "Starting in the 1960s, Brando became one of the first actor-activists to march for civil and Native American rights. He memorably refused to appear at the Oscar ceremonies to accept his award for 'The Godfather,' protesting what he felt was discrimination against Native Americans on film and in government policy."