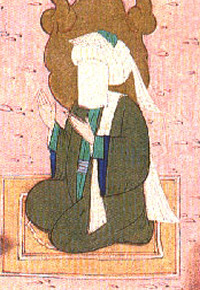 Quotes by and about Muhammad

Muhammad: "In the almighty I seek refuge from helplessness, laziness, cowardice."

Muhammad: "Say what is true, although it may be bitter and displeasing to people."

Muhammad: "It is a cause of humiliation [for a person if he cannot] fulfill his duties ... and obligations."

Muhammad: "It should be forbidden to be undutiful."

Muhammad: "Philosophy is a stray camel to the faithful. Reign it in wherever you come across it."

Abu Dharr al-Ghifari [ca. 650 CE:] "I said to [Muhammad]: 'Will you not appoint me to a public office?' He stroked my shoulder and said: 'Abu Dharr, you are weak and authority is a trust.'"

D. S. Margoliouth: "I regard Muhammad as a great man, who solved a political problem of appalling difficulty - the construction of a state and an empire out of the Arab tribes."

Muhammad as a Military Leader

Doctrina Jacobi Nuper Baptizati [ca. 635 CE:] "[Since when] do prophets come with a sword?"


David Hume: "[To Muhammad] actions are blamed or praised only on the basis of whether they are hurtful or helpful to the true believers."

Freeland Abbot: "Muhammad did not lay claim to originality for his religion. Time and time again he announced that his revelation was only a confirmation of all previous revelations."

Mahatma Gandhi: "It was the rigid simplicity ... the scrupulous regard for his pledges, his intense devotion ... his intrepidity, his fearlessness, his absolute trust in ... his own mission. These [qualities of his] surmounted every obstacle."

Martin Luther: "[Muhammad] commands that ruling is to be done by the sword."

Jules Masserman: "Leaders must ... provide for the well-being of the led, provide a social organization in which people feel relatively secure, and provide them with one set of beliefs. ... Perhaps the greatest leader of all times was Muhammad, who combined all three functions."

K. S. Ramakrishna Rao: "The personality of Muhammad, it is most difficult to get into the whole truth of it. Only a glimpse of it I can catch. ... Warrior ... Businessman ... Statesman ... Judge."

Napoleon Bonaparte: "Muhammad ... rallied his compatriots around him. In a few years, the Muslims conquered half of the world. They ... knocked down more idols [and] razed more pagan temples in fifteen years than the followers of Moses and Jesus did in fifteen centuries. Muhammad was a great man."