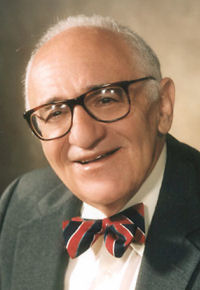 Quotes by and about Murray Rothbard

Rothbard: "This is the power problem. ... The government is not going to resign. We are not going to have a situation where Nixon reads Human Action, Atlas Shrugged, or Man, Economy and State and says, 'By God, they're right. I'm quitting!' I'm not denying the philosophical possibility that this might happen, but strategically it's very low on the probability scale. As the Marxists put it, no ruling class has ever voluntarily surrendered its power. There has to be an effort to deal with the problem of how to get these guys off our backs."

Rothbard: "The problem [with Adam Smith] is that he originated nothing that was true, and that whatever he originated was wrong."

[His wife:] "[It has been joked that] if everyone had been a libertarian, Murray would have been something else."

[His wife:] "He had an instinct for combat that came out in his writing as well as his speeches."

[His wife:] "Murray was ... very gregarious. He loved parties, and was always the last to leave any gathering."

[His wife:] "He was a real night owl. ... Although [he] was not much interested in money, except in a theoretical sense, he managed to make a living for 40 years without having to get up before noon. This was important to him."

Peter Kurrild-Klitgaard: "[He wrote in] clear prose, even when writing about very complex matters. How can a world that has the writings of Rothbard have so many who think highly of Foucault, Zizek and the post-modernists?"