Quotes by and about Roger Scruton

Scruton: "We've got to stand up not only for free speech, for the individual, but also for all that we've inherited from the Enlightenment and from Christianity, too. Why should we turn our backs on any of it? The thing that produced Beethoven and George Eliot and Tolstoy, what are we supposed to be defending? I don't want to close down free speech in response. I think we will have to close down a lot of public movement in order to trace the terrorists, there are all sorts of difficulties but no, certainly not to give way to what they want. I mean, really, when it comes to things like the cartoons of the Prophet, they should be publicly displayed, and their alleged offensiveness discussed by those who have an issue with it. As it is, we have no idea what the fuss is about. Are we being asked to deny that the Koran can be interpreted as an incitement? That the Prophet was a warrior? That there is such a thing as Jihad of which we infidels might be the target? Censorship is effectively encouraging Muslims not to take the critical attitude to their religion that we all need, and they most of all."

Scruton: "I agree there is a paucity of conservative thought. It is partly the effect of the dominance of the left. If you come out as a conservative in a university context, you will find yourself very much on the margins. But my main explanation of this is that conservative thought is difficult. It doesn't consist of providing fashionable slogans or messages of hope and marching into the future with clenched fists and all the things that automatically get a following. It consists in careful, sceptical rumination on the near-impossibility of human existence in the first place. ... And defending institutions and compromises is a very difficult and unexciting thing. But nevertheless it's the truth."

Scruton: "Zizek's defence of terror and violence, his call for a new party organised on Leninist principles, his celebration of Mao's cultural revolution, the thousands of deaths notwithstanding - all of this might have served to discredit Zizek among more moderate leftwing readers, were it not for the fact that it is never possible to be sure he is serious."

Scruton: "I don't watch television at all and until I got married and had children it had never even occurred to me. I just didn't have time - there are all those books to read."

Scruton: "[It matters] what kind of music you listen to, because it will implant its movements in your soul. ... There are great differences between those who enter into a state of frenzy through music and those who, on the contrary, enter a state of meditation."

Scruton: "It's true that people don't live up to my expectations. This is one reason why we laugh. Laughter is in a great many cases a recognition of our falling short from an ideal. If we didn't have ideals, humor would all be black. I still think that it would be a bad thing for mankind if people didn't make the effort that I and other people make to paint ideal portraits of the human condition. ... I only ever say what I think and perhaps what I think is a little bit too demanding."

Scruton: "You can make a contribution in analytical philosophy without making any connections with the broader culture. The question that interests me though is whether you can use what you know from analytical philosophy to help understand the broader culture, and I think you can. That's what I've always tried to do, certainly in my work in aesthetics. My book on the philosophy of music is very analytical but is totally about the nature and meaning of the music and culture. I think it benefits from being analytical. I wouldn't ever want to repudiate that discipline."

Scruton: "From [Sartre] I learned that the intellectual life is not an affair of the academy only, and indeed that its most important instances belong outside the academy, in the various activities around art, literature and music, through which the world strives to become conscious of itself. I stopped short of thinking, as Sartre did, that the end point of the intellectual life is political commitment. Strangely, however, my a-political stance became, in due course, a kind of politics, and within a few years of graduating from Cambridge I had become passionately political, though in the opposite direction from Sartre, whose antics in 1968 alienated me from him completely."

Scruton: "Rawls is looking for an abstract unifying principle of justification, which he calls justice, and in my view completely distorts the concept of justice in order to do this."

Scruton: "[Burke] emphasized that ... politics, which hope to organize society around the rational pursuit of liberty, equality, fraternity ... are actually forms of militant irrationality."

Scruton: "[I] recognize ... that I may be completely wrong about things that I think."

Scruton: "The great benefit of philosophy, which is also its great weakness, is that all its steps are taken in the spirit of doubt."

Scruton: "I may be wrong, but one shouldn't be afraid of entertaining the thought that I'm right."

Scruton: "A writer who says that there are no truths, or that all truth is 'merely relative,' is [in effect] asking you not to believe him."

The National: "Roger Scruton is a philosopher and academic who has probably been more vilified than any other English conservative thinker over the past 40 years."

Nigel Farndale: "He has a brain the size of Denmark ... and ... he is a Renaissance man with a capital R (barrister, novelist, opera composer, journalist, author of 20 academic books on subjects ranging from architecture to sexual desire, and organist at his local church)."

Nigel Farndale: "[Here's the thing with] his repertoire of facial expressions: he hasn't got one. ... As Scruton himself once said of his inflexible face and voice: 'I can't simultaneously develop an argument and appear like a human being.'"

Nigel Farndale: "It's a mistake to suggest ... that his most controversial views ... are just expressions of prejudice. Unlike true bigots, he welcomes serious debate and, you suspect, secretly wishes someone would come along and free him from his martyr's cross by persuading him that his 'offensive' beliefs were wrong."

Nigel Farndale: "He is ... reluctant to set himself up as a moral arbiter. ... [He says:] 'I have thousands of weaknesses and sins, like everyone else. I spend a lot of time regretting what I've done, feeling remorse for bad behavior.'"

Nigel Farndale: "Scruton doesn't think he would have made a good prime minister. ... 'I did put myself forward as a Conservative candidate, about 20 years ago,' he admits. ... 'But I was judged to be far too intellectual and was told to go away. I think they were right. I didn't have the temperament to be a politician.'"

Mick Hume: "Nobody ... should mistake Scruton for some sort of wild libertarian. ... 'I think that obedience, properly understood, is if not the highest virtue (that would make me an Islamist) the one that is presupposed by all the others - obedience to the law, to morality, to authority, to those you love and those who depend on you."

The Guardian: "[Because he's been vilified in the public eye] people [are] surprised, when they meet him, to find that he is not a bogeyman - that he is, in fact, good, thoughtful company, if somewhat awkward." 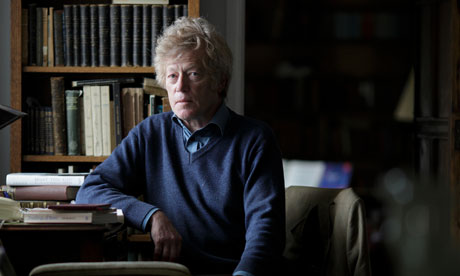