Quotes by and about Vladimir Lenin

Lenin: "The only choice is: bourgeois or socialist. ... There is no middle course. ... To belittle [socialism] in any way ... means to strengthen the bourgeois."

Lenin: "Only those who are not sure of themselves can fear to enter into temporary alliances even with unreliable people; not a single political party could exist without such alliances."

Lenin: "He who does not deliberately close his eyes cannot fail to see that ... 'freedom of criticism' means freedom ... to introduce bourgeois ideas into socialism."

Lenin: "Those who have the slightest acquaintance with the actual state of our movement cannot but see that the wide spread of Marxism was accompanied by a certain lowering of the theoretical level. Quite a number of people with very little and even a total lack of theoretical training joined the movement because of its practical significance and its practical successes."

Robert Service: "Lenin was an able suppressor of outward emotion."

Sun Yat-sen: "Through the ages of world history thousands of ... scholars appeared who spoke eloquent words, but these remained but words. ... Lenin [was] an exception. ... [He] translated [his] words into deeds." 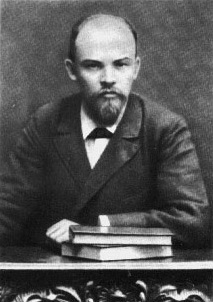 Hans Mortensen: "From an early age, Lenin threw himself into the works of Karl Marx and started interpreting and developing his ideas about Communism. Lenin was quick to convince himself that he alone possessed full insight into the intentions of the master."

Hans Mortensen: "[Lenin appeared to believe that] Marxism was the objective truth. And when an objective truth exists, opinions are unnecessary, indeed harmful."

Renato Alarcon: "Lenin was not interested in debate or disagreement and felt [that he was] completely correct."

Georgi Plekhanov [referring to Lenin:] "Of such stuff Robespierres are made."

Niall Ferguson: "No other socialist leaders were as ruthless as Lenin in adopting 'democratic centralism' (which was the opposite of democratic), rejecting parliamentarism and engaging in terrorism against opponents. Some of what the Bolsheviks did (the nationalization of banks, the confiscation of land) was straight out of Marx and Engels's Manifesto. Some of what they did ('the greatest ferocity and savagery of suppression ... seas of blood') owed more to Robespierre. The 'dictatorship of the proletariat' - which in fact meant the dictatorship of the Bolshevik leadership - was Lenin's original contribution."

Rupert Evans: "Lenin was the wizard, Stalin his apprentice."

[Lenin's sister:] "All the speculations that [Lenin's] relations with Stalin were not good ... are totally contrary to the truth."