The Star Wars character test is an unscientific and “just for fun” personality test that has achieved a surprising amount of popularity through the success of the Star Wars franchise.

This version of the Star Wars test will determine which of seven characters from the original trilogy you resemble the most, using real psychometric items.

I prize social harmony and strive to minimize negative criticisms that ruin the mood.

The IDRlabs Star Wars Characters Test (IDR-SWCT©) was developed by, and is the exclusive property of, IDRlabs International. The IDR-SWCT is not associated with Disney or Lucasfilm. STAR WARS is a trademark of Lucasfilm Ltd. No infringement is intended by the present test.

The test gives feedback such as the following: Luke Skywalker – Raised in obscurity on a moisture farm on the remote desert planet of Tatooine, Luke did not think he was destined for much until he accidentally stumbled upon a set of droids carrying a secret message. These droids prompted him to strike up a relationship with an old hermit, Ben Kenobi, who was once a Jedi knight like his father. Intensely loyal to those around him, Luke is initially reluctant to leave his uncle and aunt’s farm, but outside events eventually force his hand and prod him to take up his father’s mantle. Luke is brave and courageous but also has an eager and impatient streak. Once he decides on a course of action, he tends to struggle with his own patience, as he is convinced that good will always triumph. Restricted by the limited nature of his training and struggling to accept the dark truth about his past, Luke is an unlikely hero whose legacy almost threatens to overcome him. Yet, despite the constant challenges and setbacks he endures, he is eventually able to summon the strength he needs to overcome the greatest of adversities. As far as Luke is concerned, his friends, mentors, and ultimately his faith in the Force are truly inexhaustible sources of strength.

Or: Han Solo – Han has spent much of his life as a rogue, defined by his opposition to authority. It is a trait that has led him to work as a smuggler, bounty hunter, and gunslinger. Unsurprisingly, his career choices have made for him quite a list of enemies. He relies on his quick wit and resourcefulness to survive, but his ratty mouth and self-confidence get him into as much trouble he gets himself out of. Despite his roguish nature, Han has a strong moral compass. He will rip off crime lords and slavers, but only because he sees them as fair targets. And, though he’d loudly protest otherwise, he is extremely compassionate when it counts the most. He’s deeply loyal to the people around him, especially when it comes to his friend Chewbacca. Han is often reckless, darkly funny, and sarcastic. He’s also smart and, when needed, ruthless. He’s not afraid to shoot first and he is not going to lose sleep over what others think of him because of it.

As the creators and publishers of this Star Wars Characters Test, we have endeavored to make the test as precise and insightful as possible by subjecting it to statistical controls and validation. Before taking our free online quiz, however, please keep in mind that the test is provided to you “as-is” and should consequently not be interpreted as the equivalent of professional advice or recommendations. For additional information regarding the current test or any of our other online tests, please refer to our Terms of Service. 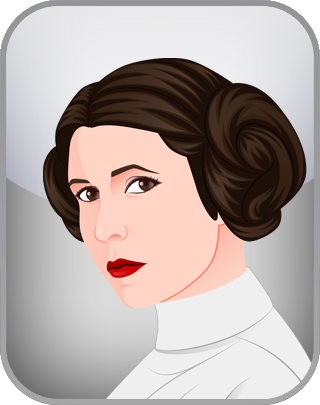 1. Free. This Star Wars Test is delivered to you free of charge, without the need to sign up, and will allow you to obtain your scores related to 7 Star Wars characters: Han Solo, Palpatine, Darth Vader, Leia, Obi-Wan Kenobi, Luke Skywalker, and Yoda.