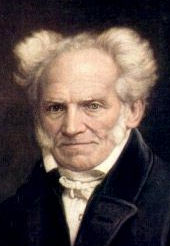 Quotes by and about Arthur Schopenhauer

Schopenhauer: "The wicked and fraudulent dominate the sphere of action."

Schopenhauer: "Hegel was a wind-bag and a charlatan."

Schopenhauer: "It is only a man's own thoughts that he really and completely understands. To read the thoughts of others is like ... putting on the discarded clothes of a stranger."

Schopenhauer: "I should be inclined to lay down the following rule: When you come into contact with a man, no matter whom, do not attempt an objective appreciation of him according to his worth and dignity. Do not consider his bad will, or his narrow understanding and perverse ideas; as the former may easily lead you to hate and the latter to despise him; but fix your attention only upon his sufferings, his needs, his anxieties, his pains. Then you will always feel your kinship with him; you will sympathise with him; and instead of hatred or contempt you will experience the commiseration that alone is the peace to which the Gospel calls us. The way to keep down hatred and contempt is certainly not to look for a man's alleged 'dignity,' but, on the contrary, to regard him as an object of pity."

Schopenhauer: "Fichte is the father of pseudophilosophy."

Schopenhauer: "Kant's weak side is that in which Goethe is great, and vice versa."

Schopenhauer [in 1818:] "[Kant is] the most important philosophical phenomenon to have appeared in philosophy for 2000 years."

Schopenhauer: "Hegel's philosophy is absolute nonsense - 3/4 of it empty and 1/4 insane notions."

Schopenhauer: "Hegel had no spirit at all."

Schopenhauer: "Hegel was a flat, witless, disgusting-revolting, ignorant charlatan who, with unexampled impudence, kept scribbling insanity and nonsense that was trumpeted as immortal wisdom by his venal adherents and actually taken for that by dolts, which gave rise to such a complete chorus of admiration as had never been heard before."

[Personal letter from his mother:] "What repels me does not lie in your heart ... it is your ideas, your judgments ... your oracular tone."

C.G. Jung: "[Schopenhauer] was the first to speak of the suffering of the world, which visibly and glaringly surrounds us. ... Here at last was a philosopher who had the courage to see."

Irvin Yalom: "Though Schopenhauer agrees with Kant that we can never know the 'Thing-in-Itself', he nevertheless believed that we can get closer to it than Kant had thought [through] direct knowledge from inside; knowledge stemming from feelings."

Walter Kaufmann: "Like Martin Luther, Schopenhauer was a virtuoso of vituperation. But he was not so coarse and scatological."

Walter Kaufmann: "Schopenhauer's own greatest discovery was, as he saw it, that Kant's thing-in-itself was one, not many, and that it was will - blind will."