Quotes by and about Augustus

[Refering to his seizure of power at age 19:]
Karl Loewenstein: "His contemporaries spoke of him as the 'teenage executioner.'"

Karl Loewenstein: "[He had] moderation ... restraint ... and ... an inexhaustible and almost inhuman patience."

Karl Loewenstein: "[He had a] carefully conceived plan [for] reconciling the old and the new." 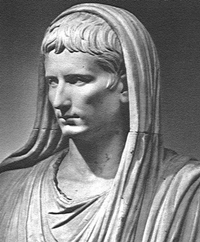 Augustus: "I found Rome brick and left it marble."

[Referring to the installation of his dictatorship:]
Augustus: "At the age of nineteen, on my own initiative and at my own expense, I raised an army by means of which I restored liberty to the republic."

[On a diplomatic mission to Egypt when asked if he wanted to see the tombs of the pharaohs:]
Augustus: "I came to see a king, not a row of corpses."

Juergen Malitz: "Young Augustus attempted to write poetry, but later burned the manuscripts ... and [resigned himself] to supporting poetry as a patron."

Tacitus: "In spite of their past accomplishments, Augustus despised the Greeks and extended his favor to the strongest of his day."

Zvi Yavetz: "His character [was] puzzling, elusive, baffling, and inscrutable."

Zvi Yavetz: "[In order to win power he] made friends and afterwards sacrificed them without batting an eyelid. ... He did not trust anyone."

Zvi Yavetz: "Cicero distrusted Augustus, but respected his determination ... and talent for organization."

Zvi Yavetz: "[He always] preferred ambiguous formulations to clear ones."

Zvi Yavetz: "[Augustus] had an impressive feeling for language and he was particularly fond of puns and wordplay." 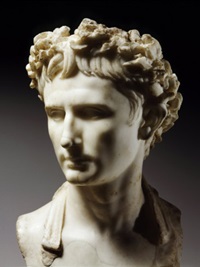 Zvi Yavetz: "The personality of Augustus ... never sparked the imagination of writers or historians."

Zvi Yavetz: "He was a modest man who worked hard all his life."

Zvi Yavetz: "Besides his palace, he possessed only three villas. ... Cicero had eight!"

Zvi Yavetz: "He preferred ... simple foods ... [and] dressed without ostentation."

Zvi Yavetz: "He was traditional and conservative."

Zvi Yavetz: "Like Cato the Elder [Augustus] believed that the commonwealth of Rome rested on ancient customs and men of virtue."

Zvi Yavetz: "It is surprising that psychologists have not paid more attention to ... Augustus. ... Maybe Augustus struck psychologists as too normal, and they put their efforts into analyzing the more ... disturbed personalities of Tiberius, Caligula, and Nero."

Zvi Yavetz: "Augustus was not impressed by the quick-[tongued] responses of talented people."

Augustus: "If we could survive without a wife, citizens of Rome, all of us would do without that nuisance."

Zvi Yavetz: "His tact served him well in his dealings with [the Senate]. When he recommended his sons for positions, he would add, supposedly out of modesty, 'if they are deserving' even though he was certain that his recommendations would be accepted without objection."

Zvi Yavetz: "His patience made it easy for him to attend long and boring meetings of the Senate and listen to ... incompetent speeches, which would have driven mad a man of Julius Caesar's type."

Zvi Yavetz: "Only a tactful man like Augustus could succeed in putting the senators in charge of the traffic lights of the empire - with the assurance that green lights would be turned on whenever his carriage was about to go through."

Anthony Everitt: "He suffered from no delusions of grandeur."

Anthony Everitt: "[He had] a deep-seated patriotism, based on a nostalgia of Rome's antique virtues."

Anthony Everitt: "Selfishness and selflessness coexisted in his mind."