Quotes by and about Immanuel Kant

Kant: "There is nothing higher than reason."

Kant: "A [monarch] may evaluate his own governance. He can do this when ... he lays upon himself the reproach 'the Ruler is not above the Rules.'"

Kant: "I am an investigator by inclination. I feel a great thirst for knowledge."

Kant: "In a war, no state is to permit acts of hostility that would make mutual confidence impossible ... e.g. the use of assassins ... or breaching [the terms] of a capitulation. ... For even in war there must be some confidence in the enemy's character."

Kant: "In a state of nature a man deprives me of [my] security if he is in my vicinity, even if he doesn't do anything to me. He harms me by the mere fact that he isn't subject to any law."

Kant: "If I am to constrain you by any law, it must be one by which I am also bound (and vice versa)."

Kant: "There was a time when I ... despised the mob, which knows nothing. [But] I learned to honor men, and would consider myself much less useful than common laborers if I did not believe that [my work] could give all [men] a value."

Kant: "Among men there are but few who behave according to principles. This is extremely good, as it can so easily happen that one errs in these principles, and then the resulting disadvantage extends all the further, the more universal the principle and the more resolute the person who has set it before himself."

Kant: "[If music is] recalled involuntarily by the imagination, [it is] wearisome rather than pleasant."

Kelley L. Ross: "One wonders to what kind of music Kant has been listening to if its recollection is 'wearisome' rather than pleasant."

Hannah Arendt: "Kant ... was much bothered by the common opinion that philosophy is only for the few ... because of this opinion's moral implications."

John Palmer: "When Einstein read Kant as a teenager, he no doubt took note of Kant's idea that time and space are not inherent in the world but the product of the mind's intrinsic structures."

[Upon reading the first pages of 'Critique of Pure Reason

Hegel: "Kant's ethics is an empty abstraction outside of reality. That which merely should be, but really isn't, has no truth."

Simon Blackburn: "For Kant, perception is itself largely an activity of thought."

Walter Kaufmann: "Kant ... was a loner and did not derive his sense of identity from any group."

Walter Kaufmann: "[Kant] ... associated morality with universality and ... with universal laws that are binding for all rational beings."

Walter Kaufmann: "Some of Kant's best friends were Jews. Yet he did not think of them as Jews. He thought of them as enlightened human beings."

Kelley L. Ross: "Immanuel Kant ... discounts the value of aesthetics into a mere 'harmony of the faculties.' As is actually rather common in philosophy, Kant's treatment of aesthetics [is merely] an afterthought. ... Kant's views may be the most strikingly contrasted with those of Arthur Schopenhauer - a philosopher who ... gave aesthetics an essential place in his system ... before the treatment of morality and religion."

Kelley L. Ross: "[Kant] wishes to construe reason as no more than the formal rules that become evident in logic."

Richard Rorty: "Had there been no Kant, the nineteenth century would have had a harder time reconciling Christian ethics with Darwin's story about the descent of man."

K.F. Zelter: "My dear friend, your way of writing is so full of parentheses and conditionals [that I lose track] even before I turn the page." [Speaking to Kant, ca. 1825.] 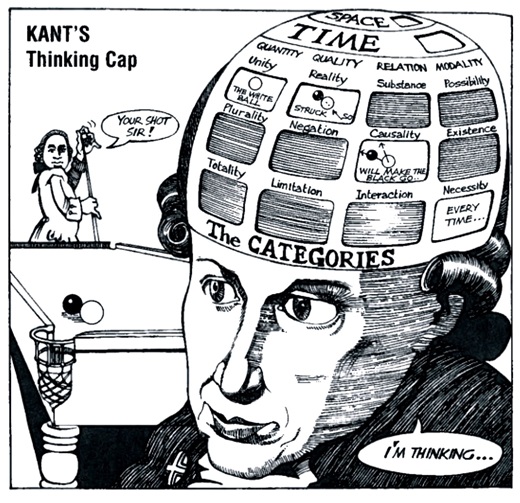