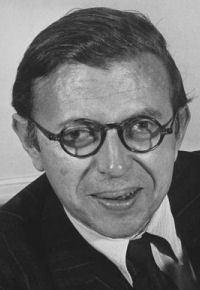 Quotes by and about Jean-Paul Sartre

Sartre: "[Regarding my] 'Critique of Dialectical Reason' I worked on it for 10 hours a day, taking speed - in the end I was taking 20 pills a day."

Sartre: "[When writing under the influence of amphetamine] I reached the point where I was scribbling illegibly rather than writing: I wrote sentences absolutely devoid of meaning."

Paul Gallagher: "It was Sartre's [political] acceptance of Russia's concentration camps that proved too much for Camus. He wanted Sartre to denounce them, in the same way they had once denounced the German concentration camps. Sartre refused."

Jacques Derrida: "[How did Sartre] who, in his own way, rejected or misunderstood so many theoretical and literary events of his time - let's say, to go quickly, psychoanalysis, Marxism, structuralism, Joyce, Artaud, Bataille - [and] who accumulated and disseminated incredible misreadings of Heidegger, sometimes of Husserl ... come to dominate the cultural scene to the point of becoming a great popular figure?"

Simone de Beauvoir: "[Sartre] always intrigued people who were not afraid of something new, for though he never tried to be original, he never fell into the trap of conformity. The freshness and dogged tenacity of his perceptions grasped the very essence of things."

Clive James: "Like Robespierre [Sartre] had an awful purity. He turned down the Nobel Prize. He was living proof that the devil's advocate can be idealistic and even self-sacrificing. Minus his virtues, he would be much easier to dismiss. With them, he presents us with our most worrying reminder that the problem of amoral intelligence is not confined to the sciences."

Clive James: "As a writer, in short, Sartre was unable to escape history, because his use of language could not keep it out."