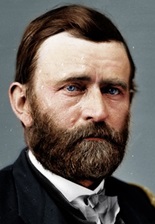 Quotes by and about Ulysses S. Grant

Grant: "I never admired the character of [Napoleon] but I recognize his great genius."

Grant: "What General Lee's feelings were [when we sat down to agree to terms of peace] I do not know. [From his] face, it was impossible to say whether he felt inwardly glad that the end had finally come, or felt sad over the result, and was too manly to show it."

Grant: "The President is, in a large degree, or ought to be, a representative of the feeling, wishes and judgment of those over whom he presides."

Grant: "It is preposterous to suppose that the people of one generation can lay down the best and only rules of government for all who are to come after them, and under unforeseen contingencies."

Grant: "[When I was young] I was not studious in habit. ... I could not sit in my room doing nothing."

Grant: "I know from my own experience that ... the fact that tobacco was prohibited ... made the majority of the cadets, myself included, try to acquire the habit of using it."

Frederick Douglass [ca. 1868 CE]: "Many who approached him told me he was a silent man."

Henry Ward Beecher: "[Grant] was ignorant of his own greatness."

Steven J. Rubenzer: "He preferred not to ... draw attention to himself; [no one] thought him self-centered or egotistical ... and he did not think himself better than others."

Steven J. Rubenzer: "His personality was a very poor match for the presidency - the worst of any president thus far."

Col. Theodore Lyman: "He habitually wore an expression as if he had determined to drive his head through a brick wall and was about to do it."

Mark Twain: "[Grant's memoir is] the most remarkable work of its kind since the Commentaries of Julius Caesar."

Abraham Lincoln: "I wish some of you would tell me the brand of whiskey that Grant drinks. I would like to send a barrel of it to my other generals."