On the Dubious Use of Fallacies

By Ryan Smith and Rachel Wood

Internet debates have seen what one could refer to as ‘the rise of the blowhard’ – people who throw down the name of a fallacy as if it somehow ‘wins’ them the discussion. But the identification of fallacies, even when properly executed, can rarely be used to prove the veracity of a position. Oftentimes, the identification of a fallacy is merely useful in pinpointing the holes in a given piece of reasoning at best. Contrary to what debating culture in general might have you believe, pinpointing the weaknesses in an opponent’s reasoning is not the same thing as proving your own position right.

In this article, we look into four popular “fallacies” that are often employed in dubious ways. It is our contention that a closer look at these matters will reveal that the business of logical fallacies is not at all as black and white as it is often made to seem.

When faced with two competing explanations of a phenomenon where it is not possible to achieve certainty, the simpler hypothesis must be preferred.

Our Comment: Occam’s Razor is a reasonable tool in fields like science and history where “facts” exist and where these facts can be accounted for as parts of a larger system, based merely on our knowledge of yet more facts. But ironically, Occam’s Razor is mainly used in fields like psychology and philosophy where “facts” are limited and have to be accompanied by a heavy dose of speculation. In other words, Occam’s Razor is often used in situations where it is not a suitable form of appeal. Western philosophy, for example, is founded entirely on assumptions. So for someone who claims to adhere to Occam’s Razor, the rational course of action is often to make no assumptions at all.  Such a person would be unable to have any metaphysics, or any philosophy at all, until he acquires a philosophy that is entirely devoid of assumptions and first principles. If everything philosophical – including the philosophy of science – is founded on unproven assumptions, then Occam’s Razor becomes meaningless, and the true adherent of Occam’s Razor would simply say: “I don’t believe a thing.” And in the case of the psychologist, that same adherent of Occam’s Razor would follow Jung in postulating some species of solipsism (i.e. the belief that only the individual consciousness is knowable to the individual). The psychologist who truly obeyed the Razor could do away with the entire idea of ever knowing another person’s type “in itself” – all that such a psychologist could know was what type the other person seemed to be to his personal consciousness. Thus, the claim that Nietzsche was an Ni type could never be reasoned to be objectively more resistant to falsification than the belief that Nietzsche was an Se type – everything would be relative to the beliefs and impressions of the individual’s own consciousness.

The thing about Occam’s Razor is that we all subscribe to a series of deeply-held beliefs. Not only do these beliefs differ from person to person, we also tend to hold on to them because we are predisposed to finding them appealing. In other words, the ideas that we cherish the most are not merely the product of deliberation – we also believe in them because they make intuitive, pre-cognitive sense to us. 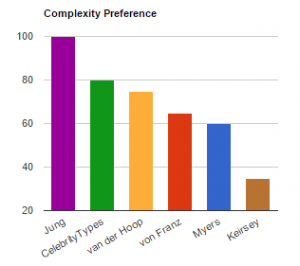 A whole range of factors go into determining which ideas the individual innately finds appealing. For example, the Big Five trait Openness to Experience can be shown to correlate with the level of complexity that one intuitively prefers. With regard to philosophy, David Hume had a higher complexity preference than Ayn Rand did. With regard to typology, C.G. Jung had a higher complexity preference than David Keirsey, and so on. And so, oftentimes when someone throws down Occam’s Razor as a way to “win” the argument, all they are doing is demanding that someone else’s complexity preference should be cut down to size until it matches their own. In other words, they are neither proving nor disproving anything, but merely re-affirming their own confirmation bias. They are using their own subjective standard to assert that the complexity of a field could not possibly be more than what they prefer, and they are begging the question as to why the complexity could not possibly be less than what they prefer.

Because an expert or authority says something, it must therefore be true.

Our comment: The Appeal to Authority is not a valid argument. But the fact that Appeals to Authority are not arguments in themselves tends to get blown out of proportion and taken by blowhards to mean that their opinion is just as good as that of a consensus among experts. Appeals to Authority are not arguments, but that does not mean that it is by definition wrong to defer to the claims of experts with deep domain knowledge and extensive experience in their field. Of course it is entirely possible that the experts are wrong, but after all there is usually a reason that a given view is the majority view among experts.

Example of Unreasonable Objection to Appeal to Authority: “Scientists have their opinions about how to cure leukemia, and I have mine, so we’ll just have to agree to disagree.”

Example of Unreasonable Objection to Appeal to Authority with Regard to Typology: “Every major authority on typology thinks person X is type Y, but even though I’ve never produced a sustained argument for my position and I’m not a recognized authority in this field, my view is just as good as theirs.”

The act of exaggerating an argument to its farthest possible extent (i.e. to absurdity).

Example of Unreasonable Objection to Reductio ad Absurdum:
Peter: “Only birds have feathers.”
Susan: “Then what about East Asian and Native American shamans who wear feathered suits in connection with certain rituals? Are they birds?”
Peter: “If you’re going to be childish, I’m not going to debate this anymore!”

Example of Unreasonable Objection to Reductio ad Absurdum with Regard to Typology:
Peter: “I can always verify that my type assessments are correct, because people’s facial features and/or eye movements give away their type.”
Susan: “Then that must mean that you can type people of whom you have no prior knowledge by merely watching videos of them with the sound turned off.”
Peter: “Don’t be stupid! I’m making a serious point.”

Any reference to evidence that is observed outside of repeatable, controlled experiments is by definition fallacious.

Our Comment: People often dismiss anecdotal evidence for no real reason. The refusal to admit anecdotal evidence into a discussion is especially impertinent when large numbers of people report seeing the same thing, such as the UFO sightings reported by both Allied and Axis pilots during World War 2, or the comparable events reported by large numbers of near-death experience survivors. Of course, these occurrences are not proof of aliens or an afterlife – but they are evidence of something, and that evidence cannot be categorically dismissed.

Secondly, not all types of anecdotal evidence are equally anecdotal. If large numbers of internationally respected scientists reported a similar anomaly, it would be foolish to put those reports on par with the premonitions of the local fortune teller. Quantity and quality of reports tend to differ, even if they are both “anecdotal.”

Ultimately, all of our knowledge rests on personal experience. Only a small modicum of that experience is ever formalized, controlled, and elevated to the status of “formal evidence.” Even in cases where formal knowledge actually is available to guide our outlook, that evidence rarely reaches a certainty of 100%. Indeed, we are more often faced with matters of more or less than matters of black and white. In the absence of formalized evidence, anecdotal evidence cannot be categorically dismissed.

Example of Unreasonable Objection to Anecdotal Evidence: “Charles Darwin was bitten by a benchuca bug in 1835. He later complained of palpitations of the heart, gastric and intestinal pains, fatigue and lethargy, shivering spells, and insomnia. These symptoms are often caused by a parasite carried by many benchucas. But the tests that Darwin’s doctors ran could find nothing wrong with him. Therefore nothing was wrong with him, and he was just a hypochondriac.”

Of course, none of this is to say that there actually are several parallel universes; that Kanye West actually does have a preference for Fe over Fi; that more complexity is necessarily better; that the scientific consensus on how to cure leukemia cannot be improved; that Friedrich Nietzsche actually was an Ni type; that “face reading” actually is pseudoscience; that Charles Darwin actually was infected by a parasite, or that Jungian typology, given future and more cogent standards of measurement, will turn out to have strong scientific validity (or none at all).

As the American statistician Cosma Shalizi has said, there are people who desire to possess profound knowledge without having to make a profound effort at thinking. From afar, Jungian typology may sometimes look like a magic wand that miraculously enables the individual to come up with deep and special insights without making much of an effort. However, as the multitude of would-be experts and ill-researched material on Jungian typology attests, there can be no substitute for effort.

We would give ourselves the same Complexity Preference as van der Hoop, if not for the fact that we have begun to follow Jung in exploring the normative side of typology, e.g. here, here, here, and here.