Based on research from Cambridge University

Hogwarts House tests are usually unscientific and “just for fun” pastimes. However, the enduring popularity of the Hogwarts Houses has led researchers to attempt to quantify them as psychometric concepts.

Though Hogwarts Houses are based on nothing more than the intuitions of J.K. Rowling, social scientists have developed a more precise way of measuring them by combining the scientific Big Five, HEXACO, and Dark Triad models of personality.

What is your Hogwarts House? For each of the following statements, indicate your level of agreement below.

I prefer to be one of the teammates to being the one calling the shots.

The IDRlabs Psychometric Hogwarts House Sorting Hat Test (IDR-PHHSHT) was developed by IDRlabs International. The IDR-PHHSHT utilizes the concept of Hogwarts Houses, which are the conceptual creation of J.K. Rowling, but is not associated with J.K. Rowling, Pottermore, or the Harry Potter franchise, and is not the equivalent of other “Pottermore,” “Wizarding World,” or “Sorting Hat” tests. HARRY POTTER is a trademark of Warner Bros. Entertainment Inc. The present test is in no way endorsed by, nor affiliated with, Warner Bros., Pottermore, or similar entities. No infringement is intended by the present test.

This psychometric iteration of the classic Hogwarts House test has been made with the aid of researchers and analysts who have previously been engaged with psychometric research work of several kinds. While the constructs of Hogwarts Houses are completely unscientific and based on the creative inclinations of J.K. Rowling, this quiz nevertheless uses items from genuine scientific instruments, such as the Big Five, the HEXACO, and the Dark Triad, to measure your propensities for the four Hogwarts Houses of Gryffindor, Ravenclaw, Hufflepuff, and Slytherin. The test was based on prior efforts to research Hogwarts Houses, empirically undertaken by scientists at Cambridge University.

Sorting Hat tests, even if presented in academic contexts, used for team-building, or free online tests like this one, are merely pointers to aid you in determining your preferred Hogwarts House. No test ever devised, not even those drawing on established academic psychometric instruments, can designate your Hogwarts House allegiances with complete validity, and no quiz can replace familiarizing yourself with the models, theories, and concepts being measured in depth. For more information on the four Hogwarts Houses of Gryffindor, Ravenclaw, Hufflepuff, and Slytherin, please refer to materials from the official Harry Potter franchise.

The authors of this free online Hogwarts House Sorting Hat Test are certified in the use of various personality tests and quizzes and have worked professionally with psychology and personality testing. Prior to using our free online psychometric Hogwarts House test, it is important to note that the results are provided "as-is", for free, and should not be construed as providing professional or certified advice or services of any kind. For more on our online Psychometric Hogwarts House test, please consult our Terms of Service. 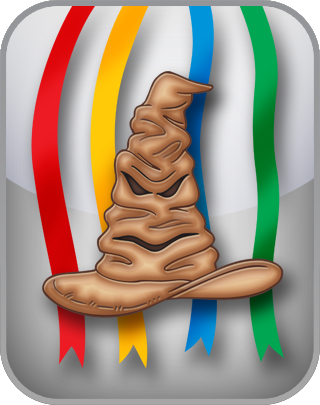 1. Free. This free online Psychometric Hogwarts House Test is delivered to you free of charge and will allow you to obtain your match on one of the four Hogwarts Houses, as they appear in the beloved Harry Potter universe.

2. Drawing on established scientific models. While there are other Hogwarts House tests out there, this test attempts a greater degree of accuracy by drawing on items from the scientific Big Five, HEXACO, and Dark Triad models of personality.