Quotes by and about Bill Gates

Gates: "If people say things that are wrong, others shouldn't just sit there silently. They should speak. ... If I think something's a waste of time or inappropriate, I don't wait to point it out. I say it right away."

[On leading his philanthropic foundation:]
Gates: "How do you make [a philanthropic foundation] work? You come up with objectives! 10 million children die each year from diseases they shouldn't die of. So you say, 'Ok, 15 years from now, that number should be 2 million.' And we'll measure ourselves according to whether that takes place."

Gates: "Whenever a company is successful, people say it's out to dominate. ... People are afraid of us because they think, 'Geez, they are quite capable.' It's daunting [for others] I suppose."

Gates: "I have to admit that business-type thoughts do sneak into my head. ... [In the beginning] I knew at ten in the morning if I'd already sold that day's worth of software. If I had, then I wanted to take care of a week's worth of sales."

Gates: "Just in terms of allocation of time resources, religion is not very efficient. There's a lot more I could be doing on a Sunday morning."

[Asked about his high school interest in computers:]
Gates: "It was hard to tear myself away from a machine at which I could so unambiguously demonstrate success. ... [I] would give this big machine orders and it would always obey."

Gates: "Society is best served by electing people who are particularly hardworking, intelligent and interested in long-term thinking."

Gates: "Setting clear goals and finding measures that will mark progress toward them can improve the human condition."

Gates: "I have been struck again and again by how important measurement is to improving the human condition."

In Defense of Standardized Testing

Gates: "Some people argue that standardized tests distort the learning experience - that teachers will 'just teach to the test' - and that tests don't measure creativity. ... But it seems to me that well-designed tests in science and math are useful in determining proficiency. Teaching students to pass such tests is a good thing. Creativity is important too, but in fields such as, say, economics or nursing, first you need to be able to do the math. No one is so creative that the person is a good nurse although unable to do the division needed to figure the right dosage of medication to give a patient."


Gates: "Steve Jobs is fundamentally odd and weirdly flawed as a human being."

Gates: Matt Ridley] seems to think that innovation involves simply coming up with a new idea, when in fact the execution of the idea is critical."

Paul Allen: "You could tell three things about [13-year-old] Bill Gates pretty quickly. He was really smart. He was really competitive; he wanted to show you how smart he was. And he was really, really persistent."

Paul Allen: "His parents subscribed to Fortune, and Bill read it religiously. One day he showed me the magazine's special annual issue and asked me, 'What do you think it's like to run a Fortune 500 company?' I said I had no idea. And Bill said, 'Maybe we'll have our own company someday.' He was 13 years old and already a budding entrepreneur." 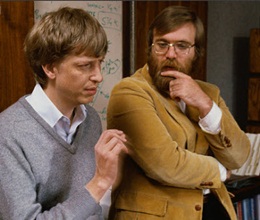 Paul Allen: "During the founding first eight years [of Microsoft] my ideas were definitely key to the company. Bill would test my ideas. I would come to him with another 10 ideas that never went anywhere - he was the sanity check on the flow of ideas. When it came to selling and marketing and staffing and all those kinds of things, he was much more excited on the business side, so we became very complementary."

Paul Allen: "[Bill is a] tough task-master. ... [In the early days he] would prowl the parking lot on weekends to see who'd made it in."

Paul Allen: "Microsoft was a high-stress environment because Bill drove others as hard as he drove himself. ... Bob Greenberg ... once put in 81 hours in four days, Monday through Thursday. ... Toward the end of Bob's marathon, [Bill] asked him, 'What are you working on tomorrow?' Bob said, 'I was planning to take the day off.' And Bill said, 'Why would you want to do that?' He genuinely couldn't understand it; he never seemed to need to recharge." 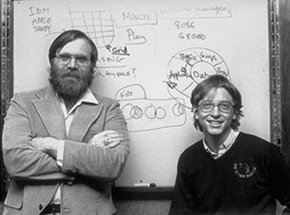 Paul Allen: "Bill liked to hash things out in intense, one-on-one discussions; he thrived on conflict and wasn't shy about instigating it. A few of us cringed at the way he'd demean people and force them to defend their positions. If what he heard displeased him, he'd shake his head and say sarcastically, 'Oh, I suppose that means we'll lose the contract, and then what?'"

Paul Allen: "It was tough not to back off against Bill, with his intellect and foot tapping and body rocking; he came on like a force of nature. The irony was that Bill liked it when someone pushed back and drilled down with him to get to the best solution. He wouldn't pull rank to end an argument. He wanted you to overcome his skepticism, and he respected those who did." 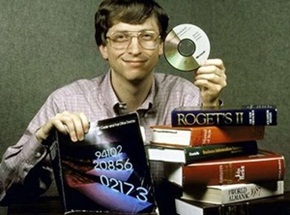 Paul Allen: "I saw this happen again and again. If you made a strong case and were fierce about it, and you had the data behind you, Bill would react like a bluffer with a pair of threes. He'd look down and mutter, 'O.K., I see what you mean,' then try to make up. Bill never wanted to lose talented people. 'If this guy leaves,' he'd say to me, 'we'll lose all our momentum.'"

Warren Buffett: "I admire Bill Gates enormously. I know him individually, and I think he's incredible in business."

Dennis Miller: "Bill Gates is a monocle and a Persian cat away from being the villain in a James Bond movie."

Des Dearlove: "He had a legacy as 'Bill the Ruthless.'" 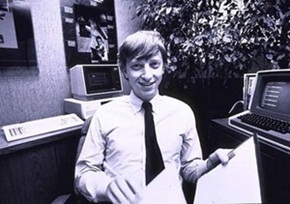 Des Dearlove: "He talked openly about 'crushing the opposition.'"

Gates: "I certainly enjoyed being the CEO."

Des Dearlove: "[In running Microsoft] Gates never took his eyes off the ball."

Des Dearlove: "[He has] immense energy and [is] driven to win."

Des Dearlove: "He had both the technical smarts to understand what's just around the corner, and the commercial smarts to sell it to the rest of us. This combination of talents makes Bill Gates one of a very rare breed of entrepreneurs."

Gates: "I have never taken more than a two-week vacation."

Peter O'Connor: "It was only after his friendship with Warren Buffett that Bill Gates allowed himself to have fun."

Gates: "From those to whom much is given, much is expected."

CNN: "When Bill Gates testified via videotape in Microsoft's antitrust trial in 1998, he was combative and defensive, as if he couldn't believe how stupid the entire procedure was."

CNN: "[In court Gates behaved as] a condescending monopolist who didn't have time for the legal system." 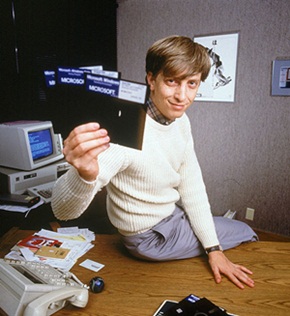 [On the accusations of being a monopolist:]
CNN: "In his rational engineer's mind, Microsoft was simply a winner. It had beaten its competitors by being smarter and working harder. It seemed deeply unfair for the government to build a case based on the complaints of those competitors and undo everything that Gates had worked so hard for."

Michael A. Schuman: "Like a good businessman, Bill Gates knew the meaning of diversifying [and always] invested in more than one product."

Steve Ballmer: "Bill is the smartest guy I [have] ever met." 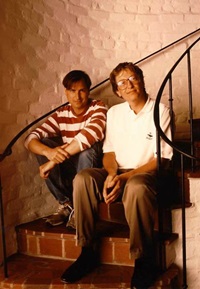 Walter Isaacson: "[Unlike Steve Jobs, Gates was] never a rebel [or] hippie. ... Instead of [ripping] off the phone company [like Jobs had done] Gates created for his school a program for scheduling classes, which helped him get into ones with the right girls, and a car-counting program for local traffic engineers."

Chuck Peddle: "There is nothing nice about Steve Jobs and nothing evil about Bill Gates. Gates is a good man."

Sun Microsystems: "[Gates is] probably the most dangerous and powerful industrialist of our age."

Gates: "I'm a dogged advocate for innovations that have brought us longer life spans, better nutrition and more freedom. But I'm also concerned about the things innovation can't always change, like how we look at justice."

Gates: "Steven Pinker's 'The Better Angels of Our Nature: Why Violence Has Declined

' stands out as one of the most important books I've read - not just this year, but ever."

Tom Evslin [Microsoft employee 1992-1994:] "[In Microsoft] you will be just as much blamed for doing the wrong thing because Bill G. told you to as you will be if you did it all on your own."

Tom Evslin [Microsoft employee 1992-1994:] "[When you're] presenting your product plan to Bill G., [he] typically has his eyes closed and he's rocking back and forth. He could be asleep; he could be thinking about something else; he could be listening intently to everything you're saying. The trouble is all are possible and you don't know which.

Obviously, you have to present as if he were listening intently even though you know he isn't looking at the PowerPoint slides you spent so much time on.

At some point in your presentation Bill G. will say 'that's the dumbest ******* idea I've heard since I've been at Microsoft!'

He looks like he means it. However, since you knew he was going to say this [because he so often does], you can't really let it faze you. Moreover, you can't afford to look fazed; remember: he's a bully.

'What do you disagree with, Bill?' you ask as assertively as you can. He tells you. ... If you see that you're dead wrong ... best to admit it immediately and move on. But, if he's wrong - which is also often the case - then you CAN'T give in. ... This is the moment of truth for a Microsoft manager.

You get no positive feedback. Bill G. looks at you coldly. 'Go on,' he says. ... You don't go back and give more arguments for the point you made. ... You've just passed a big test - if you turn out to be right."


Gates: "[A better way to do politics than now was] a couple of decades ago, when partisan divisions were not as strong, some politicians carved out niches for themselves by becoming experts in particular policy areas. They assembled excellent staff and really mastered their subject. That helped them balance tradeoffs and come up with smart, technocratic solutions."

Gates: "The decision to start Microsoft ... wasn't based on a momentous flash of insight. It was based on incremental developments."

[Asked if he wouldn't want flying cars:]
Gates: "Flying cars are not a very efficient way of moving things from one point to another."