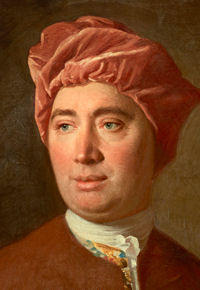 Quotes by and about David Hume

Hume: "Be a philosopher, but amidst all your philosophy, be still a man."

Hume: "To hate, to love, to think, to feel, to see; all this is nothing but to perceive."

[Looking back on his life:]
Hume: "My company was not unacceptable to the young and careless, as well as to the studious and literary; and as I took a particular pleasure in the company of modest women, I had no reason to be displeased with the reception I met with from them."

Hume: "Reading Locke and Clarke caused me to lose all faith in a deity."

Hume: "In [Shakespeare] we regret the great irregularities. ... A reasonable propriety of thought he cannot for any time uphold."

Hume: "Rousseau has not reflected very much. He has mostly felt."

Hume: "All ... ideas and impressions resemble each other."

Hume: "When I turn my eye inward, I find nothing but doubt and ignorance."

[On how he became a religious skeptic:]
Hume: "Before I was twenty [I wrote a book] which contained, page after page, the gradual progress of my thoughts on that head. ... It begun with an anxious search after arguments, to confirm the common opinion: Doubts stole in, dissipated, returned, were again dissipated, returned again and it was a perpetual struggle of a restless imagination, against [my own] inclination, perhaps against reason."

Hume: "The Qu'ran [is a] wild and absurd performance."

Ernest Mossner: "Unlike most men, who are more prone to believe than to doubt, Hume, a sceptic by temperament, found it more congenial to doubt than to believe."

Anthony Gottlieb: "Hume always saw himself as ... unconfined by any particular academic specialty, and the range of his interests was evident from the start."

Roderick Graham: "[As Hume had] no political bias [in writing his history it] would, of course, mean that he would be attacked from both sides."

Friedrich Nietzsche: "Hume in [himself was] too bright, too clear ... judged according to German value instincts, 'too superficial' ... [thus Kant was more to their liking, though Kant was] nothing original."

Friedrich Nietzsche: "Kant [was] inferior to Hume in his psychology and knowledge ... a dogmatist [without] the slightest breath of cosmopolitan taste ... a delayer and a mediator, nothing original."

Charles Trevelyan: "Whereas in Plato's 'Dialogues', Socrates is always the one expressing the 'right' views, Hume scholars disagree intensely even to this day over which voice in his 'Dialogues' is the one that speaks for Hume himself."

Charles Trevelyan: "In the debate over evidentialism (that is, the idea that the justification of a belief depends solely on the evidence for it), Karl Popper and Bertrand Russell sided with Hume in support of evidentialism, while Martin Heidegger and Ludwig Wittgenstein opposed it."

W.R. Clough: "Jung might have said [of Hume that he] limited his understanding of the whole human psyche to Extraverted (object) Sensing (perception of a physical stimulus) for data gathering and Thinking (linking ideas derived from perceptions in logical order) for evaluation."

Simon Blackburn: "[Hume] does not bludgeon the reader: On the contrary ... he is ... tentative and questioning, in dialogue with the reader and with himself."

Simon Blackburn: "[Hume's] writings have an air of relaxed sunshine about them."

Simon Blackburn: "Along with Socrates, [Hume] is the most loved of philosophers anywhere."

[Dutch book review of Hume, 1739:] "Those who demand the new will find satisfaction here. The author reasons on his own grounds ... and traces out new routes. He is very original."

Erwin Schrödinger [after reading Popper's 'The Logic of Scientific Discovery

Gerald James Whitrow: "According to Einstein's own account, the philosophers who helped him most to develop his critical powers were David Hume and Emst Mach. Hume influenced Einstein by his penetrating criticism of traditional common-sense assumptions."

Eliot Satterley: "The main danger of viewing Hume through Kantian spectacles is that it results in a cartoon version of Hume."

Eliot Satterley: "The picture of Hume as a proto-Kant is a highly problematic one."

Immanuel Kant: "I openly confess: David Hume's [philosophy] was the very thing which many years ago first interrupted my dogmatic slumber and gave my investigations in the field ... a quite new direction."

Daily & O'Brien: "Hume [immersed] himself in different [intellectual] perspectives depending upon the needs of the moment."

Jonathan Haidt: "Hume got it right. ... [He] laid a superb foundation ... that has ... been largely vindicated by modern research."