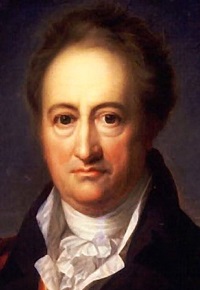 Quotes by and about Johann von Goethe

[Personal motto:]
Goethe: "To live resolutely in the whole, the good, and the beautiful."

Goethe:"I reject the notion of a nationalist education for to be educated a man must know the culture of every nation."

Goethe: "It is the most natural wish of every man to make proselytes."

Goethe: "One must be something in order to do something."

Goethe: "Whatever inwardly confirms man in his self-conceit, or flatters his secret vanity, is so highly desirable to him, that he does not ask further."

Goethe: "[I have] the feeling of the equality, if not of all men, yet of all human conditions - the mere fact of existence seeming to me the main point, and all the rest indifferent and accidental."

Goethe: "It is amidst the colorful interplay of light that we find life."

[On seeing the Nazis rise to power:]
Sigmund Freud: "Ah well - a nation that produced Goethe can't be all bad."

Friedrich Nietzsche: "Goethe did not study history in order to know. He did it to awaken within himself a sense of wonder."

Walter Kaufmann: "The reason Goethe isn't more widely known today is that his greatness cannot be seperated from [the German] language."

Walter Kaufmann: "[Kant's mind was] the diametrical opposite of Goethe's. Here we have two ideal types, and if they had not actually existed, I doubt that anyone could have invented a more striking pair of opposite mentalities."

J.C. Kestner: "Children, women, and many others think very well of him."

J.C. Kestner: "He has a high opinion of Rousseau, but is not a blind follower of him."

J.C. Kestner: "[In speaking his mind] he does not like to upset others in their fixed ideas."


Raleigh Drohan: "Goethe wanted a science that was living and full of vitality. He dreaded the ossification of science."

Raleigh Drohan: "Goethe disliked Newton's mathematization of knowledge. He thought that it caused us to rule out everything about reality that was engaging to our feelings and emotions. As he wrote in 'Faust': 'What you cannot calculate, you think cannot be true / What you cannot weigh, that has no weight for you.'"

Walter Kaufmann: "Those who cannot read Goethe in the original have no way of knowing how great he was."

G.W.F. Hegel [in a personal letter to Goethe:] "When I survey the course of my spiritual development, I see you woven into it everywhere. ... My inner nature has ... set its course by your creations."

Friedrich Nietzsche: "Goethe did not retire from life but put himself into the midst of it; ... [he] took as much as possible upon himself, over himself, into himself. ... He disciplined himself into wholeness."

Friedrich Nietzsche: "Kant was the antipode of Goethe."