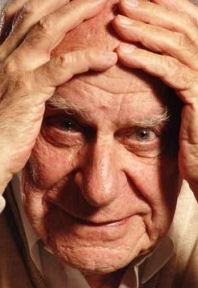 Quotes by and about Karl Popper

Popper: "[My preferred] society is one in which men have learned to be ... critical of taboos, and to base decisions on the authority of their own intelligence."

Popper: "True ignorance is not the absence of knowledge, but the refusal to acquire it."

Popper: "If in [my work] harsh words are spoken about some of the greatest among the intellectual leaders of mankind, my motive is not, I hope, to belittle them. It springs rather from my conviction that, if our civilization is to survive, we must break with the habit of deference to great men." 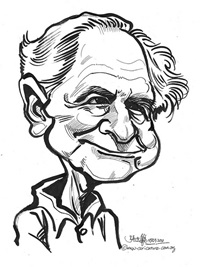 Popper: "The true Enlightenment thinker, the true rationalist, never wants to talk anyone into anything. No, he does not even want to convince; all the time he is aware that he may be wrong. Above all, he values the intellectual independence of others too highly to want to convince them in important matters. He would much rather invite contradiction, preferably in the form of rational and disciplined criticism. He seeks not to convince but to arouse - to challenge others to form free opinions."

Popper: "He who teaches that not reason but love should rule opens up the way for those who rule by hate."

Popper: "We should ... give up the idea of ultimate sources of knowledge, and admit that all knowledge is human."

[Speaking of a critic's opposing views:]
Popper: "Although [his] views are untenable, they have been most valuable and stimulating. A bold theory ... even if it is false, always means progress."

Popper [in a letter to Kelley L. Ross:] "[I attach importance to] having received a letter from a man who takes philosophy (or anything) seriously. I thought the breed had died out."

Popper: "The profession of teacher of philosophy is a ridiculous one. We don't need a thousand ... badly trained philosophers - it is very silly. Actually most of them have nothing to say."

Popper: "Oxford University has 150 philosophers and no philosophy."

Popper: "We [humans] are social creatures to the inmost centre of our being." 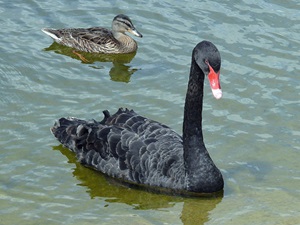 Popper: "[Intuitive knowledge] can never serve to establish the truth of any idea or theory, however strongly somebody may feel that it must be true, or that it is 'self-evident'. ... Someone else may have just as strong an intuition that the same [thing] is false."

Popper: "Theories like the psychoanalytic theories of Freud, Adler, and Jung ... [are not] falsifiable or testable."

Popper: "[Speaking with Alfred Adler] in 1919, I reported to him a case which to me did not seem particularly Adlerian, but which he found no difficulty in analyzing in terms of his theory of inferiority feelings, although he had not even seen the child. Slightly shocked, I asked him how he could be so sure. 'Because of my thousandfold experience,' he replied; whereupon I could not help saying: 'And with this new case, I suppose, your experience has become thousand-and-one-fold?'"

Popper: "[Einstein's] attitude [was so] utterly different from the dogmatic attitude of Marx, Freud, Adler, and even more so that of their followers."

Popper: "[Heidegger attributes] prophetic powers ... to himself. ... That is the only way his [theory of epistemology can hold up]."

Paul Johnson: "When Popper visited Cambridge, Wittgenstein got into argument with him where, in the heat of the moment, Wittgenstein had pointed at a firepoker at Popper to underline his point."

[Wittgenstein: "Give me an example of a moral rule?!"]
Popper: "Thou shalt not threaten visiting lecturers with pokers!"


Popper: "In attacking Plato I have, as I now realize, offended and hurt many Platonists, and I am sorry for this. Still, I have been surprised by the violence of some of the reactions. ... [They] must have found my book [on Plato] not only exasperating, but almost sacrilegious."

Popper: "[In my work] I have taken more trouble ... than most authors to make it possible for my [enemies] to check any passage quoted or referred to."

Popper: "What a monument of human smallness is [Plato's] idea of the philosopher king. What a contrast between it and the simplicity of humaneness of Socrates, who warned the statesman against the danger of being dazzled by his own power, excellence, and wisdom. ... What a decline from this world of irony and reason ... down to Plato's kingdom of the sage whose magical powers raise him high above ordinary men; although not quite high enough to forgo the use of lies, or to neglect the sorry trade of every shaman - the selling of spells ... in exchange for power over his fellow-men."

Popper: "Plato casts [a spell] over many of his readers. ... There is danger in Platonism."

Popper: "[Plato] was the greatest of all philosophers. Even [though] his moral and political philosophy is ... without parallel ... I find it morally repulsive, and indeed horrifying."

Popper: "Plato's greatness makes it all the more important to fight his moral and political philosophy, and to warn those who may fall under his magic spell."

Popper: "[In 'The Republic

' Plato advocates eugenics in the] breeding of the master race - the race of the guardians."

Popper: "[I] believe that Plato was led, by his distrust of the common man, and by his ethical collectivism, to approve of [political] violence."

Richard Robinson: "Popper holds that Plato perverted the teaching of Socrates. ... To him, Plato is a very harmful force in politics but Socrates a very beneficial one."

Popper: "One has to read Heidegger in the original to see what a swindler he was. [His philosophy is merely] empty verbiage put together in statements which are absolutely empty."

Popper: "I appeal to the philosophers of all countries to unite and never again mention Heidegger or talk to another philosopher who defends Heidegger. This man was a devil. I mean, he behaved like a devil to his beloved teacher, and he has a devilish influence on Germany."

Eugene Yue-Ching Ho: "[One of his last interests before he died was] the philosophy of Parmenides."

Eugene Yue-Ching Ho: "[In researching Chomsky, Popper said] that the main conclusion he had arrived at ... was that Chomsky could not be right in his allegation that all languages have a common structure."

Popper: "I loved [Bertrand Russell], but there was a moment when he really turned mad. During the Cuban crisis he was sending telegrams accusing Kennedy of provoking a war and congratulating Khrushchev on his mildness."

Eugene Yue-Ching Ho: "[Popper] insists on writing and presenting one's theories clearly and arguably. During our discussion, he showed us two books by [an] author who has written ambiguously. ... The author in question was ... a devotee of the fashionable 'Green movement,' and Popper repeatedly accused him of generating 'language pollution.'"

Popper: "The 'green movement' people are part of a fashionable pessimism. They want to do away with technology and progress. Do they realize what it was like for servants without washing machines? It was backbreaking servitude."

Eugene Yue-Ching Ho: "When the time came for the toasting [for Popper's birthday,] Sir Ernst Gombrich raised his glass and teasingly reminded Popper that all the guests were assembled here only 'on the conjecture that it's your 90th birthday.'"

Eugene Yue-Ching Ho: "Despite the emergence of a younger generation of well-known philosophers which includes Thomas Kuhn, Paul Feyerabend, Larry Laudan, Dudley Shapere, Roy Bhaskar, Hilary Putnam, Bas van Fraassen, and Richard Rorty, to name a few, Popper has eclipsed them all in philosophical importance, scholastic influence, and the ability to write prolifically on a wide range of subjects."