Quotes by and about Plato

Plato: "Be kind, for everyone you meet is fighting a hard battle."

Plato: "You cannot conceive The Many without The One."

Plato: "Don't force your children into your ways, for they were created for a time different from your own."

Plato: "Beauty of style and harmony and grace ... depend on ... a rightly and nobly ordered character."

Plato: "It behooves those who take the young to task to leave them room for excuse, lest they drive them to be hardened by too much rebuke."

Plato: "It is beautiful [to wish to] add another's light to your own."

Plato: "When you admonish a wrongdoer, do so gently, that it may not lead to hostility."

Plato: "[One should turn] towards the main ocean of the-beautiful-in-the-world [so that one] may by, contemplation of this Form, bring forth in all their splendor many fair fruits of discourse and meditation in a plenteous crop of philosophy."

Plato: "The desire for sex turns the penis into a disobedient thing with a mind of its own. Like an animal that will not listen ... it tries to take complete control."

Aristotle: "To Plato, only The One is real."

Drew A. Hyland: "In Socrates' relentless pursuit of knowledge he may fail to love humans sufficiently. ... This is [Plato's] criticism of Socrates - that he does not love humans enough."

Friedrich Nietzsche: "Socrates condemned art [because he preferred philosophy] and only after much internal struggle did Plato accept this judgment."

Friedrich Nietzsche: "There is nothing that has caused me to meditate more on Plato's secrecy and sphinx-like nature, than the happily preserved petit fait that under the pillow of his death-bed there was found no 'Bible,' nor anything Egyptian, Pythagorean, or Platonic - but a book of Aristophanes. How could even Plato have endured life - a Greek life which he repudiated - without an Aristophanes!"

Felix Williams: "Plato made his pupils keep silence because [to him] silence itself is speaking."

Felix Williams: "Modern Western scholars, believing Plato to be like them ... construe him as a rationalist and ignore the mystical element in his writing that is so plainly there."

Felix Williams: "Plato refers to Parmenides as his 'father' and to Heraclitus as his 'mother.'" 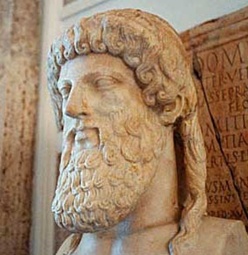 Plato: "The soul should concentrate itself by itself."

Thomas McEvilly: "[Plato] feels that ethical abstinences and austerities are essential preconditions for the cleansing and opening of the eye of the soul."

Thomas McEvilly: "In the Republic Plato presents a theory of personality. ... He speaks of three faculties, the appetitive, the ambitious, and the rational. ... The most dangerous faculty [according to Plato] is the appetitive for it bonds the soul to the senses and the realm of sense objects."

Carl Jung: "The Platonic world of ideas [corresponds to] Thinking and Sensation on the mystical level."

Thomas McEvilly: "Many modern scholars have found the asceticism expressed in [Plato] unacceptable; it does not sound like the advice of a reasonable man in the Cartesian tradition."

Thomas McEvilly: "[To Plato] the desire for excessive and special foods ... is a hindrance to the soul's attainment of intelligence."

Felix Williams: "[To Plato] the good man is expected to occupy himself with the service of others."

Thomas McEvilly: "[To Plato there are three levels of reality:] Sense perceptions belong to the lowest; next, reason infers the existence of the Ideas; finally, a mystical or unitive cognition corresponds to the highest realm."

Thomas McEvilly: "It would surely make sense of many parts of [Plato's] dialogues to acknowledge that Plato seems often to be referring to [his] highest level of [intuitive] consciousness while being ... slightly coy about just exactly what he means."

Thomas McEvilly: "[Plato] rarely if ever states anything about himself clearly."

Thomas McEvilly: "It is ... possible to read [Plato] as if he were only discussing [reason] and not mystical intuition [in his writings] but ... in that case he seems naively over-impressed by rather ordinary thought processes." 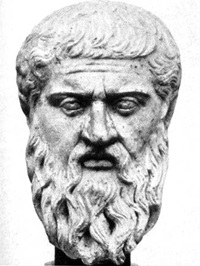 Plato: "True being [is] without color or shape."

Plato: "Wisdom is a blaze, kindled by a leaping spark."

Friedrich Nietzsche: "The charm of the Platonic mode of thought ... consisted precisely in the resistance to the obvious evidence of the senses."

Friedrich Nietzsche: "Christianity is Platonism for the people."

Karl Popper: "[With regards to political enemies] Plato [had a] kill-and-banish principle. ... In interpreting [it], modern-day Platonists are clearly disturbed [by it, even as they make] elaborate attempts to defend Plato."

A.N. Whitehead: "The safest general characterization of the European philosophical tradition is that it consists of a series of footnotes to Plato."

John Palmer: "Plato's own writings might be said to consist of footnotes to Parmenides."


Plato: "The race of the guardians must be kept pure."

Walter Kaufmann: "Plato insisted that reason can take us only so far, and that the last step to knowledge and insight has to be a vision."

Sextus Empiricus: "Plato, quite decadently, wore an earring while young."

Diogenes the Dog: "I've seen Plato's cups and table, but not his cup-ness and table-ness."

Aeilan: "Plato [in his youth] was intending to go off and fight. ... But Socrates came upon him as he was buying weapons and dissuaded him by arguing with him about what was right and making him yearn for philosophy instead."

Plutarch: "Most people do not understand until old age what Plato tells them when they are young."

Diogenes Laertius: "When Diogenes the Dog asked Plato for two bottles of wine, Plato sent him a whole case full. Diogenes then said: 'I see that Plato can't count.'"

Aelian: "Aristotle wore many rings and expensive clothes. ... Plato found this off-putting [and] unsuited for a philosopher."

Seneca: "Plato once wanted to punish one of his slaves and asked his nephew to do the actual whipping for he himself did not own his anger."

Friedrich Nietzsche: "As a human being Plato mingles regal, exclusive, and self-contained features with melancholy compassion."

Richard Rorty: "Had there been no Plato, the Christians would have had a harder time selling the idea that all God really wanted from us was fraternal love."

Rebecca Goldstein: "[Plato's concern] is not just an intellectual issue, but it is knitted with emotional life as well."

Bertrand Russell: "[Plato has] dramatic strength ... [but] is quite unaware of [the] strength of [the argument against his position] ... and allows himself to be grossly unfair in arguing against it."

Bertrand Russell: "[In spreading his ideas, Plato was willing to employ] emotional appeals, state propaganda, and the use of force."

Bartel Poortman: "[Plato thinks that] generally [it] takes 10,000 years [of reincarnation] before the psyche has regrown its wings and may return to its heavenly home. The philosopher, however, is in an exceptional position. In his case it only takes 3,000 years."

Algis Uzdavinys: "Plato's philosophical doctrine is based on Parmenides."

Algis Uzdavinys: "According to Plato, one can never gain knowledge ... by simply reasoning about something. ... One needs to turn 'the eye of the soul' upwards."

John Douglas Turner: "At his death in 347 BCE, Plato bequeathed a philosphical heritage that has not even yet spent its power."

John Douglas Turner: "[After Plato's death many believed] that Plato had corrupted the authentic Socratic method of questioning by straying off into the wonderland of speculative metaphysical theorizing."

John Douglas Turner: "[To Plato] uniquely among created beings, the human soul is granted intelligence as a divine daimon to direct him away from earth towards his kinship with heaven, where each soul has its own star from which it came and to which it will return."

Ross Kellar: "[Plato's] unwritten teachings contained his most fundamental metaphysical insights which he discussed only orally and only with his most trusted students and which he kept secret from the public."

Plato: "He who has knowledge of the just and the good and beautiful ... will not, when in earnest, write them in ink."

Plato: "Every serious man in dealing with really serious subjects carefully avoids writing. ... There does not exist, nor will there ever exist, any writing of mine dealing with this subject."

Aristotle: "It is true, indeed, that the account [Plato gives in 'Timaeus'] is different from what he says in his so-called 'unwritten teachings.'"

John Douglas Turner: "The only time Plato seems to have dealt explicitly with [his] highest principles was in his notorious unwritten lecture ... the content of which is today derived [only] from reports ... by other authors."

Dmitri Nikulin: "Nietzsche does not [seem to know about Plato's] unwritten doctrine."


Bertrand Russell: "Aristotle's metaphysics, roughly speaking, may be described as Plato diluted by common sense. He is difficult because Plato and common sense do not mix easily."

Wolfgang Pauli: "[Aristotle was] by far [a] less able thinker [than Plato] ... he was completely overwhelmed by Plato."

Ludwig von Mises: "During the 2300 years since Plato, very little opposition has been registered to his ideas."

Ludwig von Mises: "Plato and Hitler were both the same kind of consistent socialists [who] planned also for the production of future socialists, the breeding and education of future members of society."

Milton Friedman: "[Plato] assumes somehow that government is a way in which you put unselfish and ungreedy men in charge of selfish and greedy men. But government is an institution whereby the people who have the greatest drive to get power over their fellow men, get in a position of controlling them. Look at the record of government. Where are these philosopher kings that Plato supposedly was trying to develop?"

Plato: "There is a ... matter - much more valuable and divine than [natural philosophy]. ... [On this matter] I must speak to you in enigmas."

Diogenes Laertius: "He always wished to leave an impression of himself behind, either in the hearts of friends or in his books. [And] he was himself fond of seclusion."

Xenocrates: "[Plato's Unwritten Doctrine is full of] unreasonable theses in conflict with one another ... and [goes] on and on without saying anything sensible."

Alexander of Aphrodisias: "Plato made unity the universal principle of everything."