Quotes by and about Soeren Kierkegaard

Kierkegaard: "I can in no way presume to have a system."

Kierkegaard: "If I am capable of grasping God objectively, I do not believe, but precisely because I cannot do this I must believe." 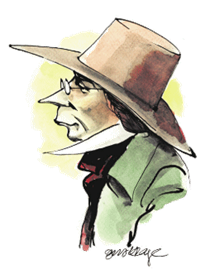 Kierkegaard: "People understand me so poorly that they don't even understand my complaint about them not understanding me."

Kierkegaard: "I am not a logician, and I have only one category [by which to live my life]. But I assure you that it is the choice of both my heart ... and my soul's delight."

Walter Kaufmann: "Where Kierkegaard, at the outset of his 'Fragments,' poses [a choice between] Christ, the Savior, and Socrates, the Teacher, and then chooses Christ ... Nietzsche, as ever, prefers Socrates."

Kierkegaard: "[Reading Schopenhauer I am] surprised to find an author who affects me so much."

Kierkegaard: "In one respect I almost resent having begun to read Schopenhauer. I have such an indescribably scrupulous anxiety about using someone else's expressions without acknowledgement. But his expressions are sometimes so closely akin to mine that in my exaggerated diffidence I perhaps end by ascribing to him what is my very own."

Kierkegaard: "[Reading Schopenhauer, I see that his initials are] A.S. Strangely enough, I am called S.A. [Soeren Aabye]."

Walter Kaufmann: "Kierkegaard was ... a militant opponent of reason."

Patrick Stokes: "[Even though he was a Christian] Kierkegaard does not take issue with Schopenhauer's disdain for Christianity - 'that is his own responsibility,' [Kierkegaard writes] - but instead, [Kierkegaard faults] Schopenhauer [for his] authorial inauthenticity: 'Strictly speaking, he is not what he personally thinks himself to be.' ... [Schopenhauer] does not [himself] inhabit the asceticism he lauds in his ethics."

John Williams: "Kierkegaard read Schopenhauer in 1854 but connected more with the man and the manner of reflection than with any of his major concepts."

Walter Kaufmann: "What makes Kierkegaard's insights so absorbing is that they are not secondhand. He drew on his own rich experience of dread and despair, no less than literature."

Walter Kaufmann: "[Unlike Freud or Nietzsche] Kierkegaard never managed to transcend his own case sufficiently. His exceptional self-centeredness was both a major source of his genius and the main reason for the limitation of his insights."

Walter Kaufmann: "Kierkegaard is extremely perceptive when dealing with inauthenticity."

Thomas M. King: "[Kierkegaard was] a partial recluse, publishing his work under eighteen different pseudonyms, and each pseudonym can be seen as an expression or nuance of his own complicated personality."