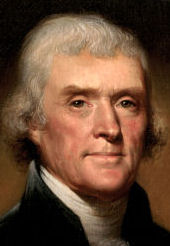 "I had rather be shut up in a very modest cottage, with my books, my family, and a few old friends, dining on simple bacon, and letting the world roll on as it liked, than to occupy the most splendid post which any human power can give."