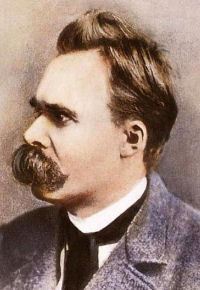 Quotes by and about Friedrich Nietzsche

Nietzsche: "One should not know more about a thing than one can digest creatively."

Nietzsche: "Knowledge for knowledge's sake is just as barbarous as hatred of knowledge. [Knowledge must be] tamed to fit with life, so that one may live what one has learned."

Nietzsche: "[I] am a strong wind in the face of lesser natures [and] I offer this advice to my enemies: Take care not to spit against the wind."

Nietzsche: "It is the business of the few to be independent. It is the privilege of the strong."

Nietzsche: "One must renounce the bad taste of wishing to agree with many people."

Nietzsche: "Woman learns how to hate in proportion as she forgets how to charm."

Nietzsche: "One loves ultimately one's desires and not the thing desired."

Nietzsche: "When a woman has scholarly inclination, there is generally something wrong with her sexual nature."

Nietzsche: "Those who follow the wormy commandments of empiricism creep near to the ground."

Nietzsche: "Posterity has not been able to add anything significant to the archetypes that were the first Greek philosophers." 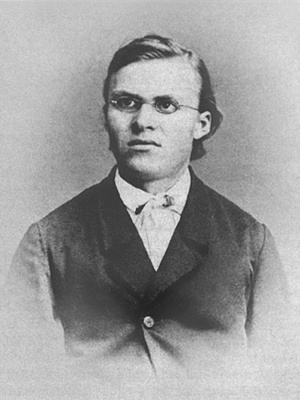 Nietzsche: Thales, Anaximander, Heraclitus, Parmenides, Anaxagoras, Democritus, and Socrates - together they constitute what Schopenhauer has called a 'republic of geniuses' - as opposed to a [mere] republic of learned men."

Nietzsche: "Thales, Anaximander, Heraclitus, Parmenides, Anaxagoras, Democritus, and Socrates: These are the philosophically 'pure' types. Everything else, from Plato and onwards, is mixture and imitation."

Nietzsche: "The philosophers who suceeded the old masters [from Thales to Socrates were] too versatile."

Nietzsche: "Plato is the first of the greats amongst the mixed types. ... Since Plato, philosophy has been in exile."

Nietzsche: "Some people believe in a special providence for books; a fatum libellorum: Yet it would have to be a terribly cruel fate ... [which] robbed us of Heraclitus ... and gave us ... Cicero instead."

Nietzsche: "Goethe did not study history in order to know. He did it to awaken within himself a sense of wonder."

Nietzsche: "The reason Xenophanes attacked Homer in his poetry was not [as he stated] because he disagreed with Homer's morality, but because he wanted to surpass and wrest the torch from Homer, the national hero of poetry."

Nietzsche: "It is with Xenophanes that [the credo of] individual freedom reaches its maximum [in antiquity]."

Nietzsche: "But how could the German language [ever] imitate the tempo of Machiavelli, who in his 'The Prince' makes us breathe the dry, fine air of Florence, and cannot help presenting the most serious events in a boisterous allegrissimo, perhaps not without a malicious artistic sense of the contrast he presents - long, heavy, difficult, dangerous thoughts, and a tempo of the gallop, and of the best, wantonest humour."

Carl Jung: "[Nietzsche's Zarathustra] was written from the unconscious and is a picture of what a man should be. If Zarathustra ... had come through as a reality ... instead of remaining in his 'spirit world', the intellectual Nietzsche would have had to go."

is to Goethe, Zarathustra

[Socrates: "If the weak can coerce the strong by banding together, the the weak are the strong, and the strong are the weak."]
Nietzsche: "Everything about Socrates is wrong." 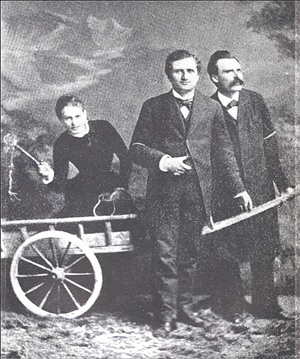 Nietzsche: "Plato was a bore."

Nietzsche: "Spinoza clad his philosophy in mail and mask by means of mathematical hocus pocus."

Nietzsche: "[Augustine behaves] as an unfairly elevated or favored slave."

Nietzsche: "Plato was too noble for Socrates."

Nietzsche: "Descartes was the father of rationalism."

Nietzsche: "Goethe taught a wanton surrender to the emotions."

Nietzsche: "[Napoleon] was amongst the worthiest of individuals."

Nietzsche: "Leonardo da Vinci is to my taste."

Nietzsche: "Schopenhauer [was] unintelligent when he raged against Hegel."

Nietzsche: "Alcibiades and Caesar were predestined to conquer and overcome other men."

Nietzsche: "'How are synthetic a priori judgments possible?' Kant asks himself - and what is really his answer? 'By means of a means' - but unfortunately not in five words."

Nietzsche: "It is high time to replace Kant's question: 'How are synthetic a priori judgments possible?' with another question, 'Why is belief in such judgments necessary?'"

Nietzsche: "In willing there is not only a thinking and sensation [but also] an emotion."

Nietzsche: "The fatalism of the weak-willed embellishes itself when it can pose as ... good taste."

Nietzsche: "In spite of all the value which may belong to the ... unselfish, it might be possible that a higher ... value ... should be assigned to ... selfishness."

Nietzsche's notion of the value of selfishness is the same as that of Ayn Rand, author of 'The Virtue of Selfishness


Nietzsche: "The greater part of a philosopher's thinking is secretly influenced by his instincts."

Nietzsche: "Old Kant was a moralist and ethical preacher."

Nietzsche: "Alexander was a Dionysius incarnate."

Nietzsche: "[I am] a higher nature [and not even] related to my parents ... Julius Caesar could have been my father."

Nietzsche: "Even the rudest word and the rudest letter is more honest than silence. ... All those given to silence are dyspeptic."

Nietzsche: "One should not mix up Buddha's 'religion' with so pitiable things as Christianity."

Nietzsche: "I attack only causes against which I find no allies, where I stand alone."

Nietzsche: "Is Wagner a human being at all? Is he not rather a disease, a mistake, a mushy brown pleasure?"

Nietzsche: "My ebullience compels me to get hold of a thing quickly if I am to get hold of it at all. ... There are truths of a peculiar timidity and ticklishness which one can seize hold of only suddenly - which one must surprise or leave alone."

Nietzsche: "It is a curious thing that God only learned Greek once he wished to turn author - and that he did not learn it better."

Nietzsche: "That everyone is allowed to learn to read will in the long run ruin not only writing, but thinking, too."

Nietzsche: "Even a third-rate soldier is better than a first-rate saint."

Nietzsche: "Ah, we lonely ones and free spirits. ... We wish for nothing more than truth and straightforwardness ... and despite our most ardent wishes we cannot help our actions being smothered in a cloud of false opinion, attempted compromises, semi-concessions, charitable silence, and erroneous interpretations. ... We hate more than death the thought that [such] pretense should be necessary, and such incessant chafing against these things makes us volcanic and menacing. From time to time we avenge ourselves for all our enforced concealment and compulsory self-restraint. We emerge from our cells with terrible faces, our words and deeds are then explosions, and it is not beyond the verge of possibility that we perish through ourselves. Thus dangerously do I live!"


Nietzsche: "We Germans are Hegelian, even if there had never been any Hegel, in so far as we (unlike all Latins) instinctively attribute a deeper meaning and a greater value to becoming ... than to what 'is' - we hardly believe in the justification of the concept of 'being.'"

Nietzsche: "I could become the Buddha of Europe ... though frankly, I would be the antipode of the Indian Buddha."

Nietzsche: "[The Buddha's] passive nihilism is a sign of weakness."

Antoine Panaioti: "One gets the impression that Nietzsche identifies Anaximander with Schopenhauer and Heraclitus with himself."

James Oppenheim: "[His work] is mainly in brief spasms, brilliant, biting and penetrating. It is always as if an almost dazzling light suddenly appeared and ceased."

Henri F. Ellenberger: "It is ... impossible to overestimate Nietzsche's influence on dynamic psychiatry. ... Nietzsche may be considered the common source of Freud, Adler, and Jung."

Martin Heidegger: "Nietzsche said of his philosophy that it was an inverted 'Platonism.'"

Kelley L. Ross: "[Schopenhauer] attributed to aesthetic value a reality and a central position in human life that is almost unique in the history of philosophy. Indeed, this would really only be trumped by Nietzsche, who may be said to have retained Schopenhauer as a starting point, while dropping all [his] moral and religious considerations."

Ludwig von Scheffler, after receiving a private lecture from Nietzsche in 1876:

Ludwig von Scheffler: "Nietzsche gave a sort of introduction to [Greek] philosophy. He let the so-called pre-Platonic philosophers pass before my inner eye in a series of fascinating personalities. ... They moved along grandly and majestically, like a shining cloud. ... But one of those lofty forms detached itself with a clearer profile from [the] flow. Here [Nietzsche's own] voice was overcome by a gentle trembling, expressing a most intimate interest ... Heraclitus! I will never forget how Nietzsche characterized him. ... [To Nietzsche, a single quote of Heraclitus'] summed up the innermost motive of [his] thought and intentions (and Nietzsche's own as well?). He drew a breath in order to pronounce the sentence. Nietzsche folded the pages of his manuscript together as he said it: 'I sought myself!'"


Greg Whitlock: "[In the study of the Pre-Socratics] Heraclitus emerges as a Pre-Socratic Nietzsche."

Greg Whitlock: "[In his work on the Pre-Socratics] Nietzsche dons the mask of classical philologist at one moment and then violates the accepted bound of that discipline the next. ... Nietzsches's command of Greek and Latin was less than masterful and sometimes even deficient, especially with regards to his indifference to participles. Finally, and perhaps most disturbing, at several places Nietzsche seems to have fabricated spurious quotations, while at many others he changes the Greek or Latin text without notification."

Walter Kaufmann: "[Nietzsche] maintains in effect that the gulf separating Plato from the average man is greater than the cleft between the average man and a chimpanzee." 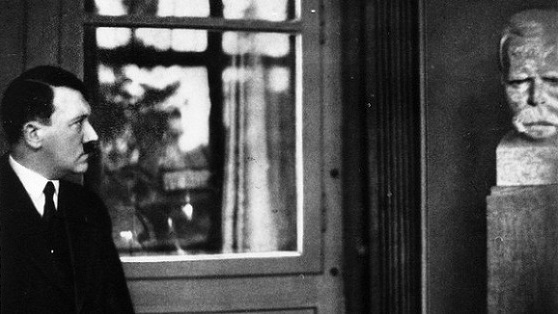