Quotes by and about Ronald Reagan

Reagan: "Above all ... no weapon in the arsenals of the world is so formidable as the will and moral courage of free men and women."

Reagan: "You and I [must] have the courage to tell our elected officials that we want our national policy based upon what we know in our hearts is morally right."

Reagan: "Fascism was really the basis for the New Deal. It was Mussolini's success in Italy, with his government-directed economy, that led the early New Dealers to say, 'But Mussolini keeps the trains running on time.'"

Reagan: "I think [my] job is to try to show [the other fellow that] he and [I] will [both] be better off if we make some practical agreements [instead of] attempting to convert [the other] to our way of thinking." 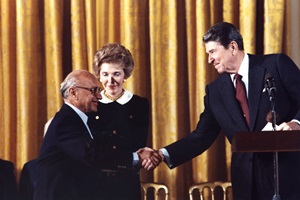 Reagan: "[Milton Friedman's book] is a survival kit for freedom."

Russell Baker: "His affability and good humor were irresistible."

Russell Baker: "He had a visceral dislike of Communists, but his ability to work with [people] led to the ending of the cold war."

Russell Baker: "[When he arrives in Washington the insiders] think Reagan is too naive, too innocent, to grasp the intellectual complexities of cold war strategy. He becomes the lone champion of nuclear disarmament in a government dominated by people at ease with the possibility of doomsday. And of course it is Reagan ... who prevails. So begins the ending of the cold war."

Joe Sobran: "Strange, the way some men can make you want to believe in them. Whatever that quality is, Reagan had it."

Nelson Phillips: "Coolidge was one of Reagan's favorite presidents. ... Reagan had Truman's portrait removed from the White House and replaced it with a portrait of Coolidge, which would then hang next to Jefferson's."

Reagan: "I've never been a great one for introspection or dwelling on the past."

Jim Wright: "His philosophical approach is superficial, overly simplistic and one-dimensional. What he preaches is pure economic pap, glossed over with uplifting homilies and inspirational chatter. Yet so far the guy is making it work. Appalled by what seems to me a lack of depth, I stand in awe nevertheless of his political skill. I am not sure that I have seen its equal."

Ronald Reagan as seen by his son:

Ron Reagan: "Particularly when I was a small boy and his television work permitted him sufficient free time, Dad was one of my favorite - and most reliable - playmates. My mother might shoo me away - 'Daddy's got work to do' - but I could almost always count on coaxing him out from behind his desk for a swim or a game of catch. I had him pegged early on as an overgrown kid."

Ron Reagan: "I could share an hour of warm camaraderie with Dad, then once I'd walked out the door, get the uncanny feeling I'd disappeared into the wings of his mind's stage, like a character no longer necessary to the ongoing story line."

Ron Reagan: "A paradoxical character, my father. He was warm yet remote. As affable as they come, he had, in his later life, virtually no close friends beside his wife. He thrived on public display, yet remained intensely private. Forceful in the role of political leader, he was, in person, surprisingly soft-spoken and gentle. ... Tender-hearted and sentimental in his personal dealings, he could nevertheless have difficulty extending his sympathies to abstract classes of people, an obliviousness that was, understandably, taken for callousness."

John M. Berecz: "[Reagan's] soothing, histrionic personality and his great social skills allowed him to emotionally connect with [people]. ... He was able to relate personally to Gorbachev without threatening him."

John M. Berecz: "Reagan was a master of reading feelings, not numbers. He could remember stories, not statistics."

Reagan: "It's true hard work never killed anybody, but I figure why take the chance?"

John M. Berecz: "[He had a] primacy of feeling, in a way that entertained and endeared others to him."

John M. Berecz: "[When speaking] he blended 'facts' and memories into a potpourri of pleasantries which delighted his listeners."

[On Reagan's allegedly bad memory:]
John M. Berecz: "When it mattered to him ... [when] he could connect emotions with it, he remembered."

Reagan: "You and I are told increasingly that we have to choose between a left or right, but ... there is no such thing. ... There is only an up or down - up to a man's age-old dream, the ultimate in individual freedom consistent with law and order - or down to the ant heap totalitarianism."

Kelley L. Ross: "Reagan could ... articulate the simple truths he believed, and a hostile press, mortified that he could speak right through their filter [and directly to the] people, grudgingly began to call him the 'Great Communicator.'"

Steven J. Rubenzer: "Despite his friendly exterior, Reagan was 'emotionally shy' [and] used his charm to keep people at a distance."

David Nyhan: "He demonstrated for all to see how far you can go in this life with a smile."

Barack Obama: "When the Berlin Wall came tumbling down, I had to give the old man his due, even if I never gave him my vote."

Margaret Thatcher: "He won the cold war without firing a shot."

Salon Magazine: "Critics thought Reagan was not a details man, but that wasn't exactly correct. Reagan could voraciously digest information that tapped his enthusiasm; he ran on enthusiasm, and without it he was adrift."