Quotes by and about Socrates

Socrates: "If you want to know your own soul, you must talk to other people."

Socrates: "I am by nature filled with desire [for worldly pleasures], but I have mastered and subjugated myself."

Xenophon: "[Socrates] had trained himself to be moderate in his requirements so that he was very easily satisfied with very little." 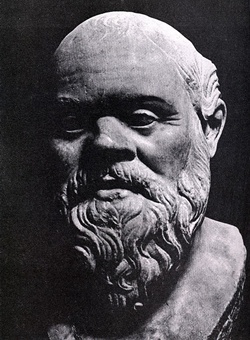 Socrates: "I have examined your position and determined your utterances to be mere brain-farts. But even so, supposing you should try to think afresh, your thoughts will be better as a consequence of today's scrutiny."

Socrates: "A system of morality which is based on relative emotional values is a mere illusion, a thoroughly vulgar conception which has nothing sound in it."

[Seeing an old man who wanted to take up philosophy, but was embarrassed:]
Socrates: "Don't be embarrassed to become better at the end of your life than you were when you begun."

Socrates: "Giving to the undeserving is the same as withholding from the deserving."

[When asked what was most gratifying in life:]
Socrates: "Education and seeing what one has not seen before."

Socrates: "[I wish] that those who do not know would simply remain silent."

[When his wife hurled abuses at him and then emptied a chamber pot of excrement and urine down his back:]
Socrates: "I knew I was in for a shower after such a thunderstorm!"

Steve Jobs: "I would trade all of my technology for an afternoon with Socrates."

Friedrich Nietzsche: "Socrates ... [in my mind] I am constantly doing battle with him." 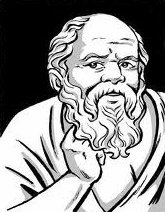 Vishwa Adluri: "[Socrates'] quest for identity is always undertaken as a comparison with an other. ... There are no Cartesian meditations here to empty the mind of all extraneous material. Socratic doubt is the opposite of Cartesian doubt."

Thomas McEvilly: "Many modern commentators ... refer to the Socratic ethic as over-intellectual and ineffective."

Thomas McEvilly: "The aim of the Socratic ... dialectic is to awaken people from their dogmatic slumbers into intellectual curiosity."

Ruby Blondell: "Socrates' 'leadership' ... encourages the follower to figure things out for himself."

Richard Robinson: "Socrates died for the right to talk freely to the young; but ... Plato takes up an attitude of condescension and distrust towards them."

Richard Robinson: "Socrates died for truth and free speech; but in 'The Republic' [Plato] advocates lying."

Aristophanes:     "[He has] the mind to others school;
fine-drawn quibbles to seek
fine-set phrases to speak
[his] is but the part of a fool!"

Aristoxenus: "[In his youth] Socrates was prone to violent outbursts."

Friedrich Nietzsche: "[To Socrates] philosophy is for everyone."

Friedrich Nietzsche: "[To Socrates] the greatest happiness that a human being can achieve is daily discussion of philosophical matters. Life without such discussion is not a life at all."

Theodorus: "I should not call [Socrates] a god but any means, but there is something divine about him."