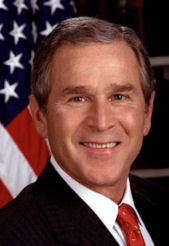 "I have always acted with the best interests of our country in mind. ... You may not agree with some tough decisions I have made. But I hope you can agree that I was willing to make the tough decisions."