Psychological defenses are defined as unconscious or semi-conscious automatic reactions that serve to protect our self-image and shield us from distressing thoughts and feelings in everyday life. We all use defenses—in positive and negative as well as mature and immature ways. Doing otherwise would simply overwhelm us.

This test, based on research from Harvard Medical School, will measure what your defenses are like. To take the test, indicate your response to each of the following questions below.

I tend to ignore unpleasant facts as if they didn't exist.

The IDRlabs Defense Style Test was developed by IDRlabs based on data and research from Harvard Medical School. IDRlabs is not associated with Harvard Medical school or other institutions mentioned in the test’s documentary material.

Performing extreme behaviors as a means to solve emotional conflicts rather than through inward reflection or feeling. For example, instead of verbally expressing oneself when angry or sad, the person throws a glass, shouts curse words, threatens others, or engages in self-harm.

Behaviors indirectly or implicitly expressing aggression or negative feelings such as annoyance or resentment, often accompanied by a façade of compliance that is really masking covert hostility, resistance, and resentment.

Reversion to an earlier stage of personality development when experiencing unacceptable or threatening feelings or thoughts. For example, an adult curling up in the fetal position when feeling afraid, or an adult throwing a temper tantrum as if they were a four-year-old when not getting their way.

Flight-type behaviors, in which a person removes or disconnects themself emotionally or physically from uncomfortable events, interactions, or stimuli that produce painful thoughts or feelings. For example, a person stays home from work because of a conflict they had with a co-worker the day before.

An involuntary decrease in motivation to engage with an associated anxiety or do something to prevent such anxiety. For example, a person doesn’t read up on their exam, struggles with shyness while trying to meet new people, or eats cake while dieting.

Attributing unacceptable thoughts, feelings, motives, and traits of one’s own to other people, thus coloring one’s own mistaken interpretation of the other person. For example, a person believes other people are looking at them in public because they themself feel unattractive or self-conscious.

Complaining or soliciting help from others, but then rejecting their support as a way of resolving emotional conflict within oneself. Help-rejecting complaining is positively correlated with hypochondriasis, a defense mechanism with which an individual feels that no one understands them, or they exaggerate their circumstances to themselves and others for the purpose of evading accountability or guilt.

Soothing oneself through fantasizing; escaping frustration by substituting the conditions of reality with imaginary satisfaction. For example, a person daydreams excessively about grand accomplishments as opposed to working on furthering their real-world success.

Rejecting unpleasant experiences by blocking external reality from awareness in order to avoid the anxiety associated with acknowledging objective reality. For example, a person missed out on a major opportunity and now tells themself it was not that big of a deal.

A tendency to perceive and communicate intrapsychic conflict as physical symptoms without organic cause in order to avoid intolerable feelings or thoughts. For example, feeling nauseous or ill due to the anxiety associated with an important presentation at work.

The separation of emotion from experiences and ideas so that reality can be accepted without an emotional response since the associated affect is blocked from awareness. For example, describing an acute traumatic event without the appropriate accompanying emotional response, i.e., thinking the feeling without feeling the feeling. 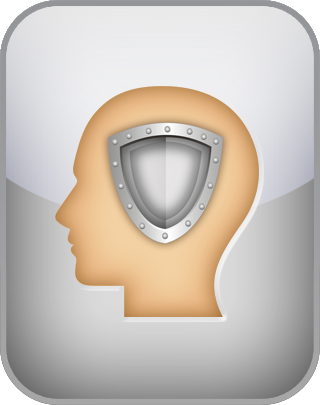 1. Free. The Defense Style Test is provided to you free of charge and allows you to obtain your scores related to the use of psychological defenses.

2. Scholarly oriented. Feedback derived from this test is based on the research of professionals in the field of defense mechanisms, defensive functioning, and coping styles with the intent of delivering a clear picture of the respondents’ characteristics indicating levels of defensive functioning as measured according to standardized items in a self-report questionnaire format.

3. Acceptable validity and reliability. During the development of the instruments this test is based on, the statements were subjected to an initial test of face validity by two psychologists and one psychiatrist, and only agreed-upon items were used.

5. Made by professionals. The present test has been made with the input of people who work professionally with psychology and individual differences research.