The 4 Axes Test is a communally-developed test that seeks to measure four central aspects about a person.

To take the 4 Axes test, indicate your level of agreement or disagreement with each of the following statements below.

Political correctness has gotten out of hand.

The IDRlabs 4 Axes Test (IDR-4AT) was developed by IDRlabs and based on previously-published research findings from a broad range of researchers in several different fields. The IDR-4AT is not associated with any specific researchers or any affiliated research institutions.

The four axes that are employed by the present test are the following:

The Lifestyle Axis: Measures whether your lifestyle is traditional and conservative or progressive and “woke.” Note that traditional/conservative people on this axis are not necessarily politically right-wing but may be center-left, as both H.J. Eysenck and Eric Kaufmann have found that many left-wingers are conservative in terms of their values and temperament. See also the Eysenck Political Test or the Moral Vignettes Test for more on the intersection between values and outlook.

The Political Axis: Measures whether your political outlook is more right-wing or left-wing according to a set of items that very broadly code for left or right in one’s political orientation. That is to say, this axis does not distinguish between conservatives and libertarians on the right, or between left-liberalist and socialists on the left, but merely gives an indication of whether you are left or right. See also the Political Coordinates Test or Political Left/Right Test for other ways of measuring political standpoints.

As the publishers of this free 4 Axes Quiz, which allows you to measure yourself across the four axes, we have strived to make the test as reliable and valid as possible by subjecting this test to statistical controls and validation. However, free online quizzes such as the present 4 Axes Test do not provide professional assessments or recommendations of any kind; the test is provided entirely “as-is.” For more information about any of our online tests and quizzes, please consult our Terms of Service. 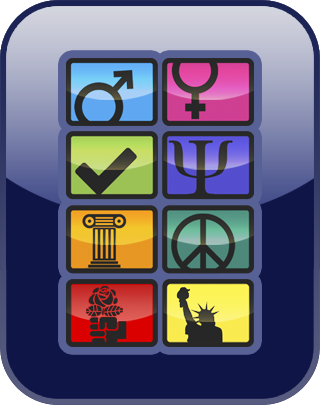 1. Free. The 4 Axes Test is delivered to you free of charge and will allow you to obtain your scores on four major personality and political axes, ultimately matching you to an overall profile across four central domains.

2. Agenda-free. While many political tests are offered for free on the internet, many such tests attempt to spin the questions to have the respondent come out in agreement with the author’s preferred political standpoint. The political components of this test attempt to be value-free by basing themselves on existing research findings.