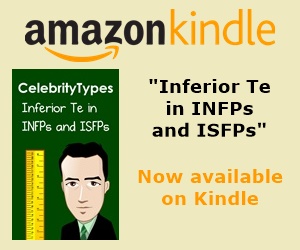 Fieldmarshal, Executive, and Leader – these are some of the nicknames I’ve seen used for the ENTJ, one of the more infamous personalities in the Jungian community. The most widely accepted mascot for the ENTJ is Napoleon Bonaparte, which is meant to portray the stereotype of an exceptionally driven individual who always wants to be in charge, shouts down their opponents, and leads loud and powerful blitzkriegs against their enemies; a charismatic army general or ruthless CEO. And along with these descriptions, the ENTJ is often seen as naturally robust in figure, commanding in appearance, and dangerously bossy in demeanor. This stereotype is, in my opinion, a compass pointing in the right direction, with the actual journey into this personality yet to be undertaken.

Let’s break down what constitutes the ENTJ functionally.

They are a Judging type, meaning that they prefer extroverted judging and introverted perceiving. This means that they base their judgment criteria on objective outside information, while simply observing and drinking in their subjective information and experiences. You could say that they are more aggressive towards the outside world and more receptive towards their inner experience.

Their preferred way of doing this is through extroverted thinking and introverted intuition. Extroverted thinking is inductive. It forms conclusions based on objective data, which they then aggressively try to fulfill. Meanwhile, introverted intuition is contemplative, in that it has no real interest in reality, but perceives the possibilities of ideas within their own mind, developing more and more compelling and delicious intellectual ideas, theories and understandings.

Third, they are very similar to the INTJ; both prefer Te and Ni. The ENTJ, however, prefers Te more than Ni. Nevertheless, they are in some sense the same type, or at least sister types. I personally like to call NTJ types the “Trailblazer”, because they both develop compelling ideas and understandings of the world and then seek to accomplish these visions as efficiently and effectively as possible. Of course, “Trailblazer” is merely a nickname to help me remember the NTJ nature, and does not mean NTJs are necessarily more inventive or ahead of their time than other personalities, or likely to take up a career that would allow them to be so.

The ENTJ, then, is a “trailblazer” for whom objective data and its resultant conclusions are of more importance and interest than subjective perceptions and musings. They are primarily concerned with fulfilling their logically determined obligations in order to gain control over their environment.

The word I have found most useful in describing the ENTJ is “subjugation.” That word has a definite negative connotation that I do not wish to imply. While the INTJ demonstrates a “will to power,” a desire to control their environment through understanding it, the ENTJ is even more so concerned with this “will to power”, desiring to control their environment through any appropriate means, to which end understanding is a primary tool. So, the reason I use the word “subjugation” is not because the ENTJ wishes to stand triumphant on top of everyone else’s unconscious bodies or play the role of big brother, but because the ENTJ, like the ESTJ, wants to ensure that their environment cannot get a foothold on them, that they have acquired as much control and power over their lives as could be expected so that they cannot be overtaken by them, and so that they can accomplish what they know needs to be done. But while the ESTJ’s Si does this through a sense of responsibility in order to face an uncertain future, the ENTJ’s Ni is more trusting of the future and desires to crush their opposition by striding brazenly into it.

This principle of subjugating the environment gives the ENTJ two distinct characteristics: their enjoyment of leadership and their brutality in combat.

While the ENFJ seeks for high places so that they can appeal to a larger audience’s sentiments, the ENTJ seeks high places so that they can have better control of their environment. The ENTJ’s Ni visions can bring them the strong feeling that they see what is really going on in the world and how to make things better from a mechanistic and efficient standpoint. It is positions of leadership that allow the ENTJ to bring these visions to fruition. This is not to say that the ENTJ necessarily demonstrates a lust for power or desire to always command others, but it is to say that the ENTJ greatly enjoys and often aspires to calling the shots. For instance, I was once assigned an ENTJ to assist me on a project. He was already more experienced in the field, but I was more experienced with this particular project, and so he was more than happy to let me take the lead in planning and reporting. However, after a week or so he made known ways that he felt things could be made much more efficient, to cut out the fluff, streamline our process and be much more productive, and he courteously asked my permission to take the lead in these areas to try out his ideas. The ENTJ relates well to Julius Caesar’s claim: “I would rather be first in a village than second in Rome.” This is because the ENTJ can become very restless when they do not have sufficient power to change things, in short, when their environment starts to exercise power on them, instead of the other way around. The ENTJ greatly dislikes that feeling. The ENTJ can be very sensitive to the logical inconsistencies and inefficiencies of others and can become agitated if they are unable to correct the problem.

My ENTJ’s method of correcting such problems was forceful; he wanted to get straight to the point, to determine what point B is and to get there as effectively as possible. If meetings get off track, they need to be forcefully put back on track. If our break time ran too long, he would get very anxious and want to get back to work. If someone or something was becoming an obstacle, his first instinct was to break it, to snap its supports in half with one clean sweep; fortunately, he knew this had to be done in an appropriate way. But it is this idea of breaking the opposition that is critical to the ENTJ personality. This is also present in the INTJ, but only secondarily. The ENTJ wants to snap their opposition, to completely crush them, with no room for them to possibly gain any power or foothold on the ENTJ. Thus comes the ENTJ’s infamous brutality in combat. This is most often seen in argument, where the ENTJ naturally takes a strong offensive, practically attacking their opponent with their reasoning, trying to completely break down the plausibility of their view. The ENTJ fights to win, and this translates into a certain strident brutality against opposition.

Socially, ENTJs can often come off as strident and energetic in this way, but not entirely given over to it. There is an interesting dynamic between the dynamism of Te and the contemplation of Ni, and I’ve seen ENTJs who have demonstrated more of one aspect or the other, while remaining in true preference ENTJs. One kind may appear like a more logically focused and sharp, but still energetic ENFJ; the other appears very similar to the INTJ and may often mis-test as such, but despite a calmer and quieter attitude they still demonstrate a greater and more obvious striving for leadership and power than the INTJ, who often prefers to work alone, pulling the strings from the background, leading people only as a means to their vision. The ENTJ, however, finds leading people the more enjoyable activity, and has no problem demonstrating obvious control. For the ENTJ the vision is always secondary to the manifestation of power.

The ENTJ’s tertiary function is Se, and this gives a similar contrast between the INTJ and ENTJ as it does with the INFJ and ENFJ, in that the ENTJ has a better relationship with actual facts and reality. They possess both a contemplative perception of inner possibilities and a clear perception of the current state of affairs. For this reason the ENTJ is more comfortable working in real time, adapting to changes in the here and now. While the INTJ wants to prevent interference in the manifestation of their vision, the ENTJ is not nearly as concerned with this, and may even welcome the challenge of real time changes and problems so that they can demonstrate their strategic prowess and flexibility. They are also more comfortable and familiar with living life to the fullest, and at least do not demonstrate the INTJ’s difficulty with real time enjoyments.

However, the ENTJ’s Achilles heel, like that of the ESTJ, is their repressed Fi. If we imagine Te as a bulldozer and Fi as a protestor, then the ENTJ’s bulldozer runs the protestors over without mercy. This can be a serious problem for the ENTJ for two reasons. First, like the ESTJ, the ENTJ can have difficulty appreciating or taking into account the emotional values of others in their goals. This attributes to the ENTJ’s brutality in combat, because they are repressing the function that normally values inner sentimentality. This can even, if unchecked, become sadistic, in the sense that the ENTJ can have trouble telling if they are becoming too aggressive and are actually hurting people. Second, the ENTJ can have a similar and perhaps even more prevalent and dangerous numbness to their own personal values. The ENTJ can struggle with finding out what they actually want. They know what is objectively logical, and how to get from point A to B, but they may become terribly lost if they realize they don’t know what they themselves really want. Usually, the ENTJ focuses on their goal, but are fueled by a background, repressed, and therefore remarkably naïve sense of personal values, as though they ground out a clichéd Fi value system in a night so that they could focus all their attention on the much more satisfying task of Te. For instance, if you were to ask an ENTJ what they themselves valued, their eventual answer would probably be some vague and undeveloped concept of justice, or truth, or the greater good, a placeholder sentiment made to satisfy their psyche. But when the time comes that the ENTJ must reassess their own values, when for instance they cannot determine logically what their next move should be, when it is left up to their preference alone what their next point B should be, then this placeholder is worthless, and this lack of direction can result in confusion or even personal crisis.

So, in summary, the ENTJ is subjugating, seeking to have control of their environment through the acquisition of leadership and brutality against opposition. Their tertiary Se provides them with a clear relationship with real time events and adaptability to changing conditions; however, their repressed Fi can make them dangerously numb to others’ personal values or their own.

Thanks for watching, and for all the ENTJs out there, thanks for having the courage and strength to break down the obstacles in the path of great accomplishments.